Ukraine Is One Step Closer To Joining NATO 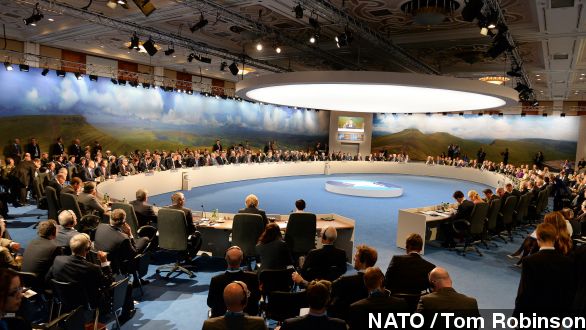 In case it wasn't already obvious Ukraine wants nothing to do with Russia, it was made pretty clear Tuesday.

This was the scene in Ukraine's parliament after lawmakers overwhelming voted to do away with the country's neutral status. (Video via YouTube / All Politics)

In other words, they just opened the door to eventual NATO membership. Cue angry statement from their eastern neighbor.

Russian Foreign Minister Sergei Lavrov said it was a "counterproductive" move that only "fuels up the situation."

No surprise there. The last thing Russia wants is NATO at its doorstep. The alliance has already added 10 former Soviet states and allies since the end of the Cold War.

Ukraine was not one of them. But once upon a time, it, along with Georgia, did pursue NATO membership.

"We must make clear that NATO welcomes the aspirations of Georgia and Ukraine for their membership in NATO and offers them a clear path forward to meet that goal," President George W. Bush said during a 2008 visit to Bucharest.

But the idea didn't sit well with most Ukrainians. Public opinion polls at the time showed most saw NATO as a threat, not as some protective force.

He's the one who was ousted in last year's uprising. (Video via YouTube / Alex Right)

And he's also the one who, under pressure from Russia, declared Ukraine a nonaligned state back in 2010, preventing it from joining military alliances. And at the time, there really was no need to. (Video via YouTube / Alexandr Chernoff)

Russia's invasion of the Crimean peninsula this past March arguably changed that. (Video via The Kremlin)

As Heather Conley of the Center for Strategic and International Studies put it, Putin deserves a big thank you from NATO: "[NATO] was really searching for its purpose and it was having a fairly significant identity crisis. … And it has now not only been repurposed, it's been reinvigorated."

Ukrainian officials haven't said when they'll submit their application for NATO membership. And once they do, it'll likely take years before Ukraine becomes a full-fledged member. (Video via NATO)

And that's if NATO allows it. Already, Germany and France have expressed concerns that adding Ukraine to the bloc could further provoke Russia.