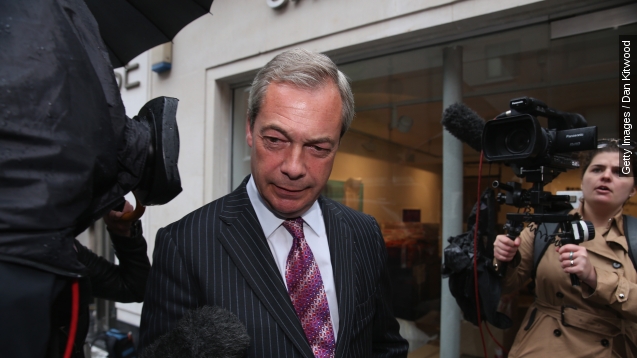 SMS
UKIP's Farage Keeping Power As Party Cracks Start To Show
By Matt Picht
By Matt Picht
May 14, 2015
UKIP leader Nigel Farage will remain in power after his election defeat, but the party's been gripped by infighting.
SHOW TRANSCRIPT

This is Nigel Farage, leader of the U.K. Independence party, announcing his resignation as party leader after losing his seat in Parliament during the 2015 election.

"I did go into that room with my resignation determined that I was going to walk out of there a free man, and they dragged me back over the wall."

And this is Farage on "Question Time" one week later, explaining why he's still in charge of UKIP despite resigning.

Farage was a casualty of the Conservative's unexpected electoral windfall, losing his South Thanet seat to Conservative candidate Craig Mackinlay. The UKIP leader had previously promised to stand down if he lost his seat, and he formally resigned soon after the results were announced. (Video via Channel 4)

But apparently, the party's electoral commission refused to accept his resignation, and Farage generously agreed to hold onto power after all. He also confirmed to the BBC that he won't hold a by-election to find a new leader.

That's rubbing some high-profile people in the party the wrong way.

UKIP donor Stuart Wheeler told The Guardian, "I don't think he should have resumed leadership the way he did, and I don't like the way it happened. ... I think a softer approach, a rather quieter approach is what's going to be needed."

Patrick O'Flynn, a senior UKIP member of the European Parliament, accused Farage of taking the party too far to the right. He told The Times Farage has become a "snarling, thin-skinned, aggressive man" who turned UKIP into a "personality cult."

Two of Farage's top advisors left the party shortly after that criticism, leading to speculation that UKIP is coming apart at the seams.

It's hardly the only party going through some turbulent times after the U.K. elections. Both Labour and the Liberal Democrats are facing an upcoming leadership contest after their parties suffered massive electoral losses.

But UKIP needs to make sure it has its troops in line for the party's real test: the in-out referendum on E.U. membership Conservative Prime Minister David Cameron promised during his campaign.

This video includes an image from Getty Images and music from Podington Bear / CC BY NC 3.0.