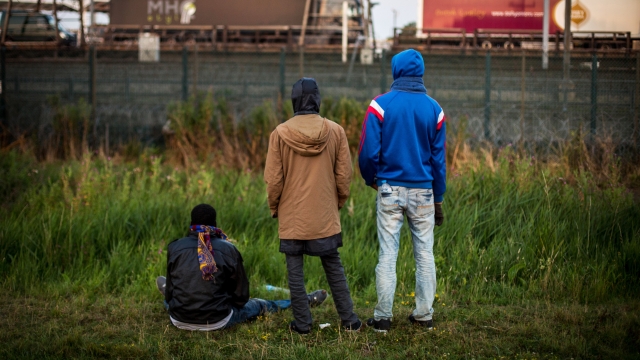 It looks like the U.K. is taking a page out of Donald Trump's book.

Robert Goodwill, the country's immigration minister, has confirmed plans to build a "big new wall" in the French city of Calais to prevent refugees and migrants from entering the U.K.

The structure, dubbed "The Great Wall of Calais" by local outlets, will be about 13 feet high and run for more than a half-mile along both sides of the main road into the city's port.

The wall will be extra security in addition to a fence that already lines the road.

The move is the U.K.'s latest attempt to tighten border security in Calais, which is a popular place for migrants to enter the country illegally.

Currently, many refugees hop onto the back of cargo trucks heading into the U.K. and hope that no one discovers them. Officials believe the wall will help stop that from happening.

Hundreds of people have compared the U.K.'s plan to Trump's proposal to build a wall along the Mexican border.

But Britain's wall is significantly smaller than what Trump has in mind. And many argue that the need for better border security in Calais is necessary for the safety of its residents.

Still, critics have condemned the project as a waste of taxpayer money and even "morally wrong."

A spokesperson for the U.K. Home Office told Fox News they expect the wall will be completed by the end of the year.