UK Soccer Fans Generate Earthquakes When They Celebrate A Goal 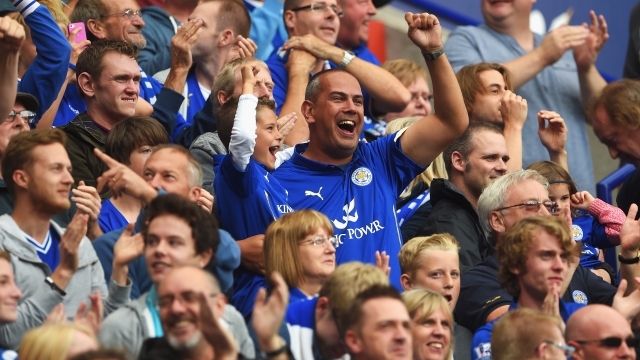 SMS
UK Soccer Fans Generate Earthquakes When They Celebrate A Goal
By Katherine Biek
By Katherine Biek
March 8, 2016
Fans of the Leicester City Football Club in the U.K. have caused small-scale quakes during several matches this season.
SHOW TRANSCRIPT

Some fans wave signs or flags at the game. Others paint their faces. And then there are those who apparently cause tiny earthquakes when their team scores.

The University of Leicester in the U.K. discovered soccer fans have actually been celebrating with so much energy when the Leicester City F.C. Foxes score that it's caused spikes in seismic activity.

The largest of these mini earthquakes was recorded when the Foxes scored a game-winner in the 89th minute of a match against Norwich on Feb. 27.

Around the same time as that goal, a 0.3-magnitude quake registered on the monitoring equipment geology students had set up at a nearby primary school.

A seismologist with the British Geological Survey told the BBC, "It wasn't just a case of cheering or clapping, it was 30,000 people standing up at the same time — an awful amount of energy."

A smaller earthquake, about 0.1 in magnitude, registered when the Foxes scored a goal in the first half against West Bromwich Albion on March 1.

Seattle Seahawks fans have generated several small-scale quakes throughout the years, none more famous than the "Beast Quake" running back Marshawn Lynch started in the 2011 playoffs.

The University of Leicester students will continue to monitor the rest of the Foxes' season for any more seismic activity.

They're betting player Jamie Vardy will generate the highest magnitude quake after he scores.