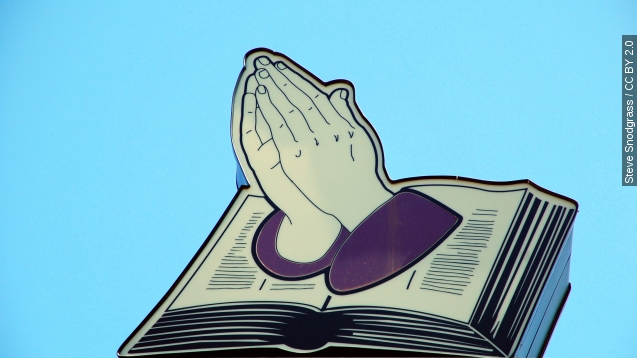 An advertisement promoting prayer has been banned from some U.K. movie theaters, and the Church of England is worried about the effect it might have on free speech.

"For thine is the kingdom, the power and the glory, forever and ever. Amen," people in the ad said.

The ad, which features the Lord's Prayer, was nixed by the three largest cinema chains in the country, meaning it won't be showing on more than 70 percent of cinema screens. The ad promotes the church's new website, which aims to renew prayer "in a digital age."

The ad agency for the theaters told multiple outlets its policy is to turn down religious and political ads so audiences aren't offended. So, the church put the video online. (Video via Digital Cinema Media)

"We find that really astonishing, disappointing certainly and rather bewildering. We truly invite people to make their own mind up ... and to come to their own mind whether it's something that they'd be upset about if they were to see it in the cinema," the director of communications for the Church of England told BBC.

"Here is a few lines that can be used to help them to feel that they are actually speaking to that higher power," Bazil Meade, a participant in the ad, said.

While the promo never aired in theaters, the church was hoping it would run before the new "Star Wars" movie. That way a "multi-generational" audience could see it around Christmas. (Video via Walt Disney Studios / "Star Wars: The Force Awakens")