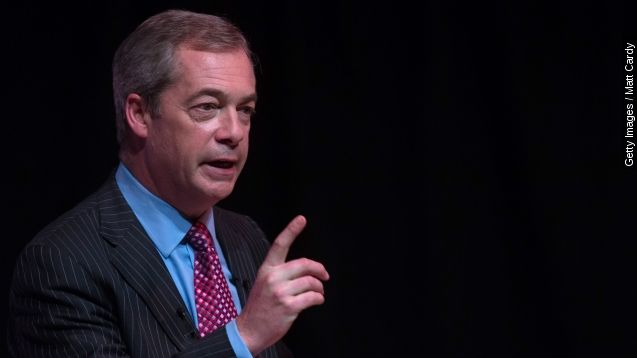 SMS
UK Leader Car Crash: Assassination Attempt Or Missed Recall?
By Matt Moreno
By Matt Moreno
January 4, 2016
U.K. Independence Party leader Nigel Farage says a crash in which the wheels came off his car was an attempt on his life, but a radio host disagrees.
SHOW TRANSCRIPT

Leader of the U.K. Independence Party Nigel Farage says he might have been the target of an assassination attempt when the wheels fell off his Volvo while he was driving in France. But, could there be a simpler answer?

Farage's Volvo V70 crashed when the nuts on four of his wheels were "deliberately unscrewed," according to police who arrived on the scene. The crash reportedly sent Farage scrambling for safety. (Video via Sky News)

The crash happened in October, but Farage just recently spoke about it in depth with the Daily Mail.

He told the outlet, "It was the middle of bloody nowhere, and I was caught in a very bad position. ... I slowed down, put the hazards on and then one of the wheels came off. I jumped over the wall as quickly as I bloody well could to get away from lorries and everything."

But LBC radio host James O'Brien has a different theory — a missed recall.

The recall says "wheel securing bolts may not have undergone the correct hardening process" and, as a result, "the wheel may become loose and detach."

"You will not find a single other member of that committee who makes that allegation," Farage said.

"Alan Sked has, the founder of the Ukip," O'Brien rebutted.

"Well you just said I wouldn't find anyone else," O'Brien said.

And they're unlikely see eye-to-eye on this latest issue, either.

While Farage hasn't responded to O'Brien's suggestions directly as of early Monday, he did say in the Daily Mail interview that police told him "sometimes nuts on one wheel can come a bit loose — but not on all four." (Video via UKIP MEPs)

Although we might never get our answer. Farage says he's made no formal report about the crash and has decided to not take any further action.