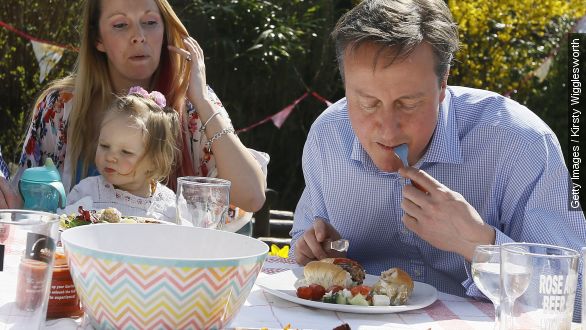 "Can you tell me more about the key policies?" a reporter said.

"Sum them up. What are the key policies?" a reporter said.

"If you look closely, you'll see David Cameron's got a knife and fork," a BBC reporter said.

"What kind of monster eats a hot dog with a knife and fork?" a CNN anchor said.

"So awkward. … So wrong," Roya Nikkhah said on Sky News.

DO: Be yourself … even if that means baring it all.

"A double life revealed. Until now, he'd kept his pornography separate from his politics. ... He goes by the name of Johnny Rockard. For reasons of decency we can't show his X-rated performances," a BBC anchor said.

"The UKIP parliamentary candidate from Hampshire accused of potentially wooing voters by handing out sausage rolls," an ITV anchor said.

"There were treats offered. Apparently this is against electoral law. It is called treating," Gavin Haynes, Vice political correspondent told Sky News.

DO: Campaign in all seven kingdoms.