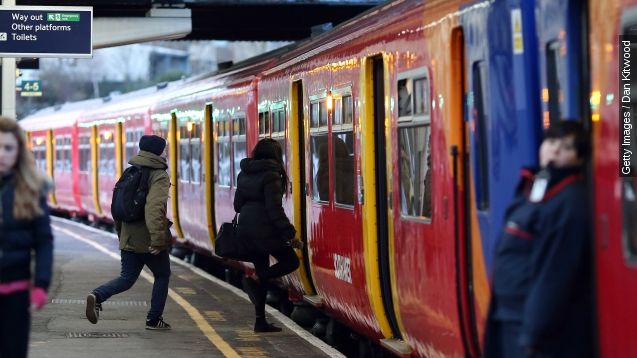 SMS
UK Commuters Spend 6 Times More On Train Fares Than Other Europeans
By Christine Slusser
By Christine Slusser
January 4, 2016
We all know public transit isn't that cheap — even worldwide. But a study says British people have it worse off than the rest of us.
SHOW TRANSCRIPT

Public transportation isn't cheap. But a study says British people who commute to work by train are spending more of their salaries on fares than other Europeans. Up to six times more, actually, according to a new study.

The big hullabaloo is over what's been dubbed "Tory tickets," aka rail fares. Currently, the rails are not publicly owned.

A quick refresher — Tories is a nickname for the Conservative party that's the reigning government in London and the U.K. Therefore, they're the ones controlling the transport for London and National Rail.

But Action for Rail, whose slogan is "People Before Profit," is pushing for trains to be owned by the public — tweeting it'd be cheaper with the #railripoff.

That same group gathered U.K. government data and found U.K. commuters spend six times as much of their salaries on rail fares than those using public railways in France, Germany, Spain and Italy.

The group said those in the U.K. have the highest commuter fares in Europe. They took a poll of more than 1,700 U.K. adults and found 61 percent of participants thought the trains weren't worth the money, and 62 percent thought fares would be cheaper if the train companies weren't trying to make a pound.

And a British politician and member of Parliament, who is not part of the Conservative party, tweeted out this link from the Labour Party that calculates how much your Tory ticket has gone up in the last eight years based on your ZIP code.

The Guardian says rail fares "have been rising above inflation for more than a decade as successive governments attempted to shift more of the cost of the railways from taxpayer to passengers." For example, season ticket costs have risen by about 25 percent since 2010, the outlet says.

The latest cost hike took place over the weekend, and the government has pledged to freeze fares. A representative of Network Rail mentioned the figures ignore the fact that Britain's trains are faster and more frequent than others.