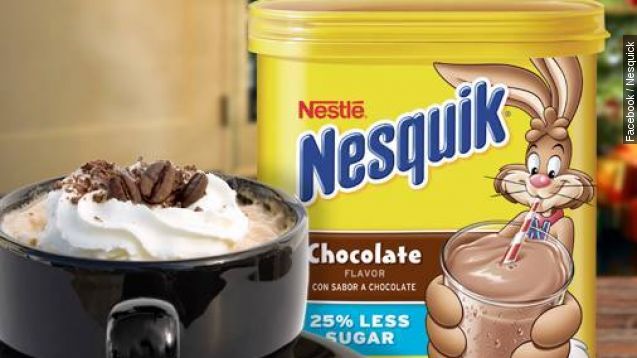 By Katie Link
December 23, 2015
The hot chocolate drink would add more than 20 grams of sugar to your morning meal.
SHOW TRANSCRIPT

Food and drink giant Nestle did not have a great start to its Wednesday. The company behind the Nesquik brand is rethinking some of its ads in the U.K.

"Kids need the right start to their day. That's why I give them new Nesquik with Opti-Start."

The U.K.'s advertising watchdog flagged Nesquik labels, which branded its hot chocolate product as a nutritious and "great" addition to a healthy breakfast.

Because, let's be honest; adding about 20 grams of sugar to any kid's morning could be a recipe for disaster.

After receiving complaints from the Children's Food Campaign, the ad group ruled that the phrase "a great start to the day" was misleading and that Nestle can no longer use that phrase in its advertising.

Also under attack in this ad? The chocolate brown bunny, whose appearance might have targeted the ads at young children. Nestle tried to defend the character by saying it had "been carefully designed to convey a physically active, energetic character who could promote a healthy lifestyle."

Nestle has made steps to improve its nutritional content and encourage being active. This year, the company reportedly nixed artificial coloring and reduced added sugar in its chocolate powder by 15 percent.

To resolve the issue in the U.K., Nestle has agreed to remove the "great day" slogan from its products.