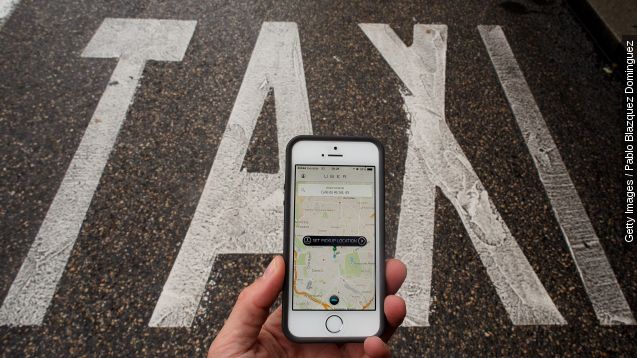 SMS
Uber Wants You To Play Its New iOS Game And Become A Driver
By Leah Becerra
By Leah Becerra
June 11, 2015
Uber's exclusive iOS game isn't a full-throttle racing experience but rather a recruitment tool for new drivers.
SHOW TRANSCRIPT

Thursday, Uber asked the Web, "Ever wondered what it's like to be an Uber driver-partner?"

We're guessing no one who hasn't already applied has ever had that thought, but the company is still using this idea to push a new mobile game that's exclusively for iOS.

It's called "Uber Drive," and the point of the game is get your passenger from point A to point B.

And rather than driving around like a mad person — like in "Crazy Taxi" — Uber says more points are given "for identifying the safest and most efficient routes." There's just no way that'll be fun, but it doesn't sound like that's the point.

The New York Times' Mike Isaac says the app is trying to recruit people who aren’t already looking into driving for Uber. He writes, "Users can sign up to become drivers and upload their applications and screening materials directly from inside the game."

Uber has also added educational elements to the game so players can become more knowledgeable about the city.

For now, the only city that's playable is San Francisco. But if the game does well, Uber plans to add more cities. (Video via Expedia)

The Verge reports the game was an Uber employee's side project — meaning whether it flops or not doesn't matter.

Which could be good because it sounds really lame. Unless of course you're an Uber driver working in San Fran, who wants to brush up on your Bay Area knowledge.

This video contains music by Bensound / CC BY ND 3.0.