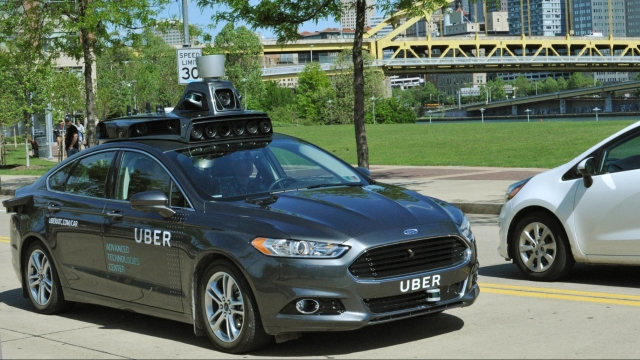 SMS
Uber Unleashes Its Self-Driving Car On Pittsburgh
By Cody LaGrow
By Cody LaGrow
May 19, 2016
The company is working out the bugs in its self-driving technology.
SHOW TRANSCRIPT

The cars are just going to go ahead and take it from here. Uber is totally pulling a Kitt from "Knight Rider" and introducing its self-driving cars to the streets of Pittsburgh. Full disclosure: It's not nearly as sexy as a Pontiac Firebird.

Feast your eyes on that autonomous hybrid Ford Fusion. This unique Uber car will operate in the Steel City over the coming weeks while collecting mapping data and testing self-driving capabilities. And that's all done with some high-tech sensors: laser scanners, radars, hi-res cameras — that sort of thing.

If all goes well, the driverless coalition Uber partnered with last month — which includes Lyft, Ford, Volvo and Google — could have a little more proof that cars sans drivers aren't as scary as some believe. Heck, they might even be safer.

Uber said it's still getting the technology right, so the car won't be totally driving itself. To ensure your safety, there will be a person in the driver's seat to take over manual control — you know, just in case the driver gets in an "I, Robot" type of situation.