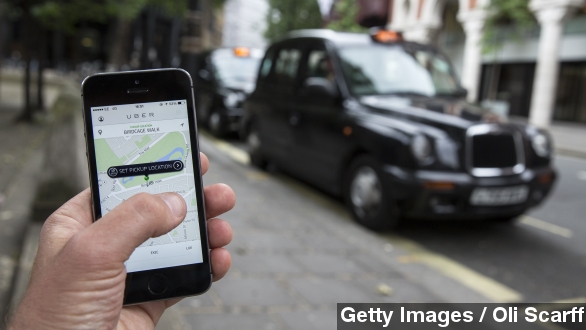 SMS
Uber Takes Cooperative Approach With European Expansion
By Ben Lawson
By Ben Lawson
January 18, 2015
Uber is learning from past blunders and laying out a cooperative strategy for tackling taxi regulations in Europe.
SHOW TRANSCRIPT

Uber seems eager to move on from the public relations nightmare that was 2014 and make 2015 the year of European expansion.

But Kalanick made clear to do that, European regulators would have to work with the ride-sharing company.

In Uber's short, five-year lifespan, it's faced so many regulatory hurdles in both the U.S. and abroad it's hard to keep track.

So it's perhaps a smart move that the company is aiming for a more cooperative approach to dealing with regulations in 2015.

He blames those regulations for stifling innovation in the transportation industry, in job growth and in addressing concerns over pollution caused by vehicles.

Kalanick said adding Uber to an E.U. city would add 10,000 jobs over four years and improve transit efficiency by keeping personal cars off the road.

Despite all the bad press and the obstacles it still has to overcome, Uber's growth shows all the signs of a company here to stay. It started 2014 doing business in 60 cities and ended the year with operations in 250.