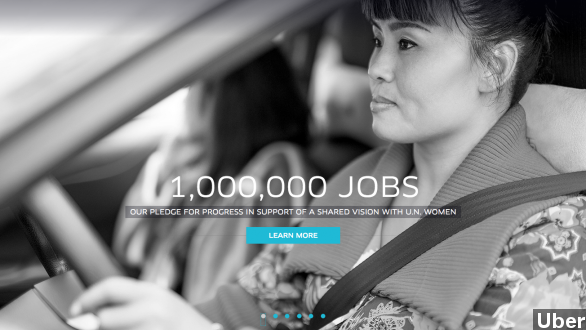 SMS
Uber Pledges To Hire 1 Million Women By 2020
By Danny Matteson
By Danny Matteson
March 10, 2015
The ride-booking company announced the initiative in partnership with the United Nations on Tuesday.
SHOW TRANSCRIPT

Over the past year, Uber has been in the news a lot — often for the wrong reasons. But now the company is making a move that might drum up some positive press. (Video via Uber)

On Tuesday the ride-booking company announced an initiative with the United Nations Women Organization to create 1 million jobs for women by 2020.

"My Name is Esther. I live in Nairobi, and I work with Uber as a driver," an Uber driver said.

Not coincidentally, the announcement comes with the 20th anniversary of the U.N.'s Beijing Declaration, a declaration meant to "advance the goals of equality, development and peace for all women everywhere in the interest of all humanity."

Uber wrote in the announcement: "We intend to invest in long-term programs in local communities where we live and work. … This important mission can only be accomplished when all women have direct access to safe and equitable earning opportunities."

Employment equality is, of course, a commendable goal, but actually achieving that 1 million number might be trickier for Uber than it sounds. (Video via New York Magazine)

According to Uber's own numbers, the company only has around 162,000 drivers in the U.S. — and only about 14 percent of them are women. (Video via Uber)

If you do the math, that's a little less than 23,000 female drivers in the states. (Video via Uber)

And, doing some slightly more complicated math, Business Insider adds: "America remains its largest market. For it to reach this goal — assuming the 86:14 male:female ratio continues — it means its global driver workforce will need to grow to 44 times that of its current US driver pool."

If that weren't enough, convincing women to get behind the wheel might be tricky as well. Especially with multiple reports of women being raped by Uber drivers around the world.

So, yeah. Tough odds. But odds Uber appears ready to take on.

As The New York Times reports, Uber hit $2.8 billion in its most recent funding round and now has plans to expand into the Asia-Pacific region.

This video includes images from Uber and P.J. Onori / CC BY 3.0. Music courtesy of