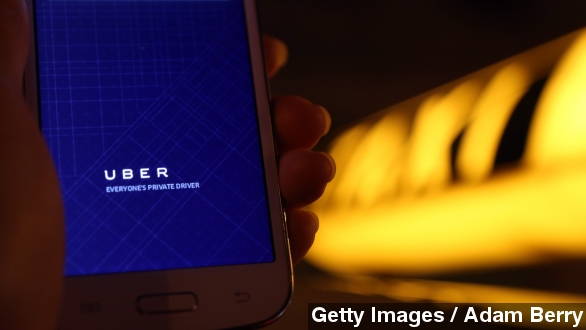 SMS
Uber Driver Accused Of Rape In India
By Bram Sable-Smith
By Bram Sable-Smith
December 7, 2014
An Uber customer in New Delhi claims she was raped by her driver, once again drawing scrutiny to the company's lax driver background checks.
SHOW TRANSCRIPT

Police in India have arrested an Uber driver accused of raping a 26-year-old woman in the nation's capital of New Delhi.

The woman hired an Uber car on Friday night and, after falling asleep on the ride, woke up to find the car was parked in a secluded place where she says the driver then raped her. (Video via CTV)

Uber Delhi issued a tweet Saturday saying it was "deeply disturbed by the reported incident."

And on its official blog, Uber said, "We are working with the police as they investigate. We will assist them in any way we can."

The police located the alleged attacker thanks, in part, to a photo of his license plate that was snapped by the woman. (Video via CNN-IBN)

Over the weekend, dozens of students scuffled with police as they protested the number of rapes in New Delhi, which has more rapes than any other city in India. (Video via BBC)

Rape in the city has been the subject of public scrutiny and protests since a 23-year-old woman died after being beaten and gang-raped by six men while riding a bus in 2012. Four of the men were sentenced to death by hanging. (Video via NDTV)

And this most recent incident is also bringing increased scrutiny to Uber over its driver screening policies.

A 2013 article in The New Yorker revealed UberX recruited drivers for the South by South West conference on Craigslist, and conducted only a 45-minute training and brief background check.

And that same year, an Uber driver was arrested for allegedly raping a 20-year-old woman, though district prosecutors did not press charges in the case.

For its part, Uber has repeatedly maintained that it prioritizes safety. The driver accused in the attack will appear in court Monday.