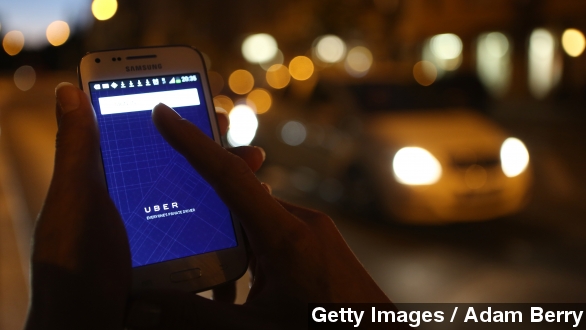 SMS
Uber Doing Damage Control After Bout Of Bad Press
By Jake Godin
By Jake Godin
November 19, 2014
While Uber’s managed to jump around controversial incidents in the past, two reports by Buzzfeed have drug the ridesharing company into the spotlight.
SHOW TRANSCRIPT

This is just not a good week for Uber. The ridesharing company is in full gear scrambling to repair its image.

It started with a Monday Buzzfeed report where Uber’s VP of business, Emil Michael, suggested the company could invest money to essentially dig up dirt on journalists critical of Uber and using that dirt against them.

Michael apologized profusely through Twitter and written statements, chalking the remarks up to him venting, but it was too late. The damage was done.

His remarks sparked a firestorm of headlines in what seemed to be a culmination of the media’s ire towards Uber.

Uber’s CEO and co-founder Travis Kalanick tried his hand at damage control the next day, relaying a series of 13 tweets acknowledging that Michael’s comments were bad — but not bad enough to get him canned.

And then Buzzfeed drops another bombshell on Tuesday with a report detailing Uber’s in-house tracking tool dubbed “God View”.

Using it, corporate employees — but not the drivers — can track Uber vehicles and the customers using them.

Uber told Buzzfeed it’s investigating both the tool and a New York exec who allegedly used it to track a Buzzfeed employee.

With these two latest incidents only the most recent in a string of many other controversies, folks are wondering what Uber’s future holds.

Sure, some companies could bounce back from a bout of bad PR like this, but that usually requires taking responsibility in some form.

And some are saying Uber’s apparent refusal to fire Michael over his comments, along with its liberal use of its customers’ data, shows the company isn’t taking its position as seriously as it should be.