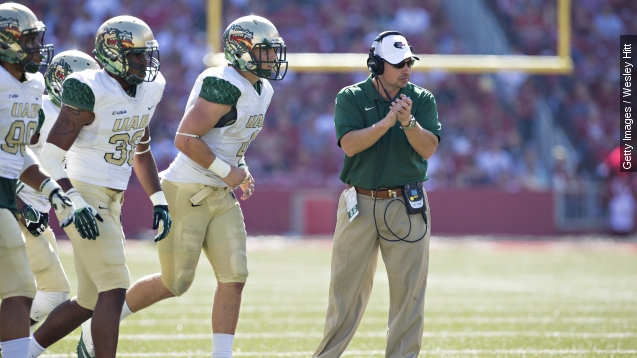 SMS
UAB's Lost Football Program Finds Funds To Refuel
By Jay Strubberg
By Jay Strubberg
June 1, 2015
The University of Alabama at Birmingham has announced it's bringing back its football team just six months after cutting the program.
SHOW TRANSCRIPT

Well, that didn't last long. The University of Alabama at Birmingham has announced it's bringing back its football team.

"We believe that those that love UAB will turn this energy into the money required to take athletics to a new level of success. ... As of today, we are taking steps to reinstate the football, rifle and bowling programs," UAB President Ray Watts said.

The decision comes just six months after UAB shut down its football team, along with the two other sports programs. It became the first Football Bowl Subdivision team to do so in nearly 20 years.

UAB president Ray Watts previously said keeping the teams would be a heavy financial burden and the university wouldn't be able to bring in enough revenue to sustain the programs — this after a report from CarrSports Consulting broke down the numbers.

Then in March, a second report from College Sports Solutions found UAB could keep those sports programs afloat, but the school would run on a $3.2 million annual deficit.

But, according to ESPN, the report also said reinstating the programs would "foster much goodwill and stimulate a substantial amount of spiritual and financial support" from the Alabama community and those affiliated with the university.

And that prediction appears to have come true, at least in the short run.

Justin Craft, a former UAB football player who spearheaded the second report, said UAB supporters have already raised more than $27 million to help the football team take to the gridiron once again.

"It's either the dumbest thing of all-time to cut a football program. And, then, of course, reinstate it. Or, one of the most genius things I've ever heard for raising money," CBS' Doug Gottlieb said.

The UAB football Blazers wrapped up the 2014 season with a 6-6 record, its best finish in a decade.

But a handful of players transferred when the school pulled the plug on the football team last December, so there's likely quite a bit of rebuilding in UAB's future.