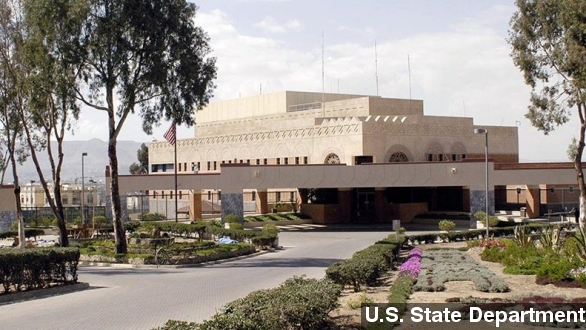 SMS
U.S. Suspends Operations At Embassy In Yemen
By Kate Grumke
By Kate Grumke
February 10, 2015
The U.S. is reportedly closing its embassy in Yemen because of security concerns.
SHOW TRANSCRIPT

Anonymous officials are telling media outlets the U.S. is closing its embassy in Yemen because of security concerns.

The State Department hasn't confirmed or denied the report but says it's continuing to assess the situation. (Video via Al Jazeera)

On Sunday, the embassy announced it was suspending all consular services and U.S. citizens needing assistance should go to embassies in neighboring countries.

The U.S. Embassy started winding down public works last month, and the State Department has been reducing personnel at the embassy since September, when Houthi rebels overran the capital city.

The embassy will reportedly be completely closed by Wednesday. That would make this the third U.S. embassy to close in the Middle East and North Africa, following Syria in 2012 and Libya last year.

After the 2012 Benghazi attack that killed four Americans, the U.S. has been more cautious in its approach to security concerns.