U.S. Reportedly Pulling Out Last Of Military In Yemen 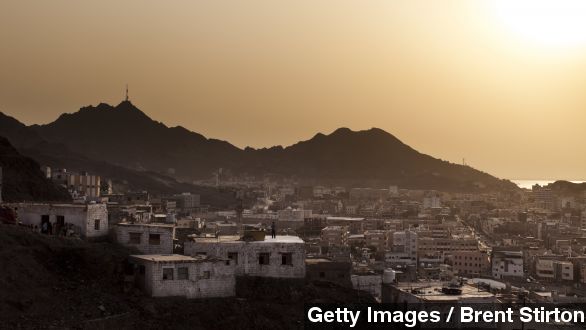 SMS
U.S. Reportedly Pulling Out Last Of Military In Yemen
By Jake Godin
By Jake Godin
March 21, 2015
Sources tell CNN that the U.S. government is pulling out the last of its special operations members from Yemen due to a worsening security situation.
SHOW TRANSCRIPT

The U.S. is reportedly pulling out the last of its military presence in Yemen, or about 100 special operations forces members.

That comes from CNN, which says the military personnel are being pulled from Al Anad air base in the country’s southwest.

"That is because in the area where they were, there were on Thursday and Friday two apparent possible prison breaks in which Al-Qaeda prisoners may have left detention facilities," a CNN reporter said.

The evacuation comes as the security situation in Yemen devolves. This week saw the deadliest terrorist attack in the nation’s history after two mosques were bombed, and earlier this year, a Shiite rebel group forced the U.S.-backed government out of the nation’s capital, Sanaa.

State Department spokesman Jeff Rathke told reporters, "We call upon all Yemeni parties to return in good faith to a political dialogue to resolve their differences. ... Political instability threatens the well-being of all Yemenis and denies them the opportunity to live in safety, peace and prosperity."

Shortly after Sanaa was taken, the U.S., France and U.K. shuttered their embassies in Yemen citing the worsening security situation.

Unnamed U.S. Department of Defense officials told The Washington Post the Pentagon had lost track of $500 million in weapons and equipment given to Yemen’s government.