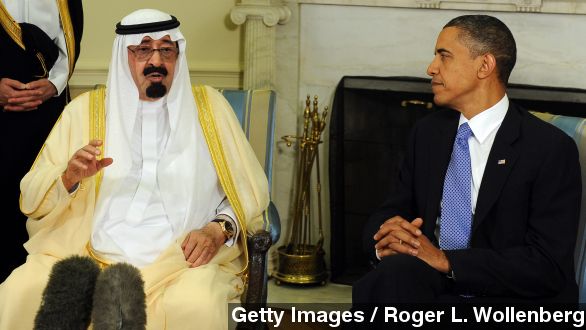 It’s one of America’s closest allies.

"On behalf of the American people, welcome. We appreciate your friendship," President Obama said while meeting with King Abdullah in June 2010.

And this month, it beheaded 10 people.

We’re talking about Saudi Arabia — a country where "punishment by sword" is common, where a person can be publicly flogged for “insulting Islam” and where women aren’t allowed to drive.

By the State Department's own admission, Saudi Arabia is a major abuser of human rights.

The answer dates back decades to when, during World War II, Franklin Delano Roosevelt declared the defense of Saudi Arabia a vital interest to the U.S. (Video via U.S. National Archives)

In other words, the Saudis could provide a steady supply of oil.

Today, the relationship is more strategic than it is economic thanks in part to a boom in U.S. shale oil production. Here's how the president explained it:

"Sometimes we have to balance our need to speak to them about human rights issues with immediate concerns that we have in terms of countering terrorism or dealing with regional stability," President Obama said on CNN.

The U.S. has a long history of these sorts of tradeoffs in the Middle East — like when it supported Iran under the Shah as well as Saddam Hussein in the '80s. (Video via History Channel, YouTube / mgyatso)

Basically, Saudi Arabia helps keep other regional powers, like Iran, in check, and that's so far proven too valuable for the U.S. to risk it over the kingdom's human rights record. (Video via YouTube / Elephants)

Not to mention, Saudi Arabia is a key partner in the U.S.-led fight against ISIS, and it's arming Syrian rebels deemed "moderate" who are trying to overthrow Bashar al-Assad.

On Wednesday, President Obama arrived in Saudi Arabia to pay respects to the late King Abdullah and meet with his successor, who by the way, has already had one beheading on his watch.

This video includes an image from Getty Images and the U.S. Department of State and music from Kevin MacLeod  / "Desert City."