U.S. Men's Soccer Coach Might Be Worried About His Job 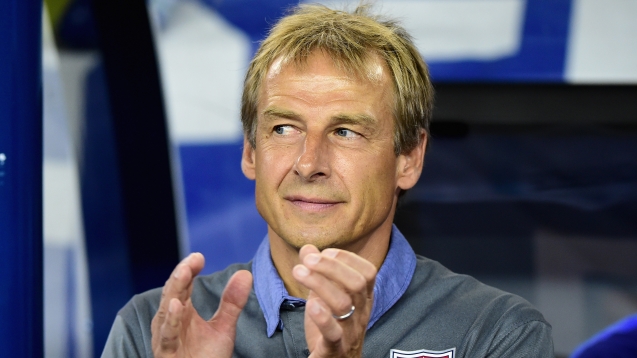 SMS
U.S. Men's Soccer Coach Might Be Worried About His Job
By Carter Woodiel
By Carter Woodiel
October 8, 2015
U.S. men's soccer coach Jurgen Klinsmann managed to evade a World Cup group of death. But a recent slump means he might need a win to keep his post.
SHOW TRANSCRIPT

The U.S. men's national soccer team has an important match in a sold-out venue Saturday night. But as match day approaches, fans aren't talking about the players on the field. They're talking about whether the coach might be losing his job.

There's a lot of speculation over whether Jurgen Klinsmann should be fired if his team loses Saturday's match, which just happens to be against U.S. arch rival Mexico. The winner gets a place in the 2017 Confederations Cup, an important international tournament held in the same venues as the next World Cup.

One person who thinks he should go is Landon Donovan, arguably the most famous American soccer player in history, who expressed his thoughts on Klinsmann to ESPN Tuesday. (Video via NBC Sports)

"Anywhere else in the world, if this coach had had those results, and they lose this game against Mexico, they'd be fired," Donovan told ESPN. "And I think if Jurgen wants to hold everyone — all the players — to that standard, then he has to be held to that standard too."

But Donovan isn't exactly an unbiased judge of Klinsmann. In 2014, Klinsmann controversially left Donovan off the roster for the World Cup. Donovan would play his final game for the national team later that year.

When Klinsmann, a former German national team star, was hired as U.S. coach in 2011, he was expected to bring an outside perspective to a team whose previous three head coaches had been Americans. (Video via Deutsche Welle)

He got off to a strong start, leading the U.S. out of the so-called opening-round "Group of Death" in the 2014 World Cup, his first as the team's manager.

But since then, the team has struggled, capped off by a loss to Jamaica in this year's Gold Cup, leading to the worst U.S. finish in the regional tournament since 2000.

Klinsmann has also been publicly critical of MLS, the U.S. domestic soccer league, preferring budding American stars get minutes in Europe instead.

Even if the U.S. loses to Mexico, though, it's far from guaranteed Klinsmann will be sacked. One writer for The Washington Post points out how Klinsmann was hired with an eye toward long-term growth of U.S. soccer, making on-field setbacks less of a concern.

Klinsmann remains optimistic about Saturday's match, which will take place at the Rose Bowl in Pasadena, California. He says he's confident the Stars and Stripes will win, and the numbers are on his side. Klinsmann has never lost against Mexico as U.S. head coach.

This video includes images from Getty Images and music from Reatch / CC BY 3.0.