U.S. Marine Charged With Murder Of Woman In Philippines 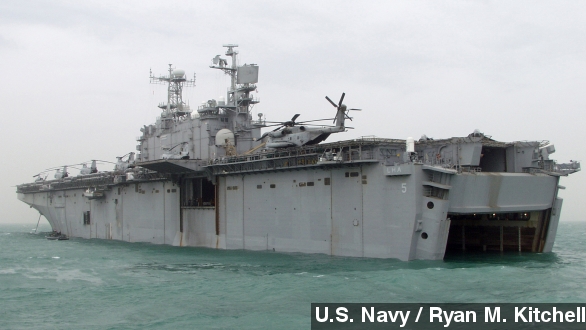 SMS
U.S. Marine Charged With Murder Of Woman In Philippines
By Ben Lawson
By Ben Lawson
December 15, 2014
A U.S. Marine is being held on murder charges by the Navy in a case that's putting strain on the relationship between the two countries.
SHOW TRANSCRIPT

A U.S. Marine has been charged with the October murder of a transgender woman in the Philippines, in a case that's been putting stress on the recent ties forged between the two countries.

Prosecutors says Private Joseph Scott Pemberton attacked Jennifer Laude after the pair checked into a hotel room together and Pemberton discovered she was transgender.

Laude was later found dead from apparent strangulation in that hotel room.

Pemberton was taken into custody by the U.S. Navy shortly after the incident and was being held on the USS Peleliu.

That sparked protests from Filipino citizens who called for Pemberton to be handed over to Philippine authorities while he awaited trial. He was later moved to a Philippine military base.

Many of the protesters called to scrap the recently signed Visiting Forces Agreement, which has been hailed as a foreign policy victory for President Obama.

The agreement reforged military ties between the U.S. and the Philippines after decades of rough relations.

And it seems how the U.S. is handling the Pemberton case is being watched closely. MSNBC quotes a statement from the Philippine government that said it looks "forward to the full cooperation of the U.S. government in ensuring that justice is secured for Laude.”

The Navy Times reports that, as a result of the incident, the Navy put port visits for nonessential reasons in the country on a temporary hold to avoid further tensions, something that The Philippine Star said hurt local businesses.

The U.S. has reportedly not sought special treatment for Pemberton, but many are still calling for him to be held in a jail like a civilian charged with a similar crime would be.