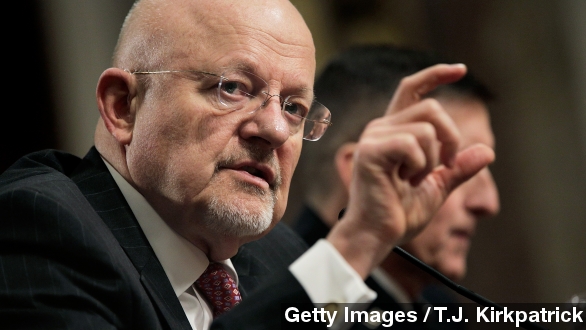 By Christian Bryant
January 7, 2015
Speaking at an intelligence conference, Director of National Intelligence James Clapper explained how he knows North Korea was behind the Sony hack.
SHOW TRANSCRIPT

Director of National Intelligence James Clapper doubled down Wednesday on the belief that North Korea carried out the hack on Sony and even named the person who might've authorized the attack.

"My dinner host was General Kim [Yong Choi], a four-star general in charge of the Reconnaissance General Bureau — the RGB. The organization responsible for overseeing the attack against Sony," Clapper said at a cyber security conference at Fordham University.

That was Clapper referencing his dinner meeting with General Kim Yong Choi last year to help secure the release of former American hostages Kenneth Bae and Matthew Miller. According to Clapper, Kim would've been the one to give the green-light for the cyber attack.

In addition to naming a culprit, Clapper also warned of future North Korean cyber attacks and said the U.S. must "push back" against the communist country.

This revelation from the U.S. intelligence head follows skepticism from other security experts as to whether North Korea actually committed the Sony hack. According to Bloomberg, Clapper — for the first time — explained North Korea was behind the attack because the U.S. has had to deter the country from carrying out similar attacks.

"I have very high confidence about this attribution, as does the entire intelligence community," Comey said.

North Korea has denied responsibility for the Sony attack and even ostensibly offered to help the U.S. investigate the hack. But following the implementation of U.S. sanctions on North Korea Tuesday, a spokesperson said the sanctions will only harden North Korea's resolve to "defend the sovereignty of the country."