U.S. Economic Recovery Not Equal For All 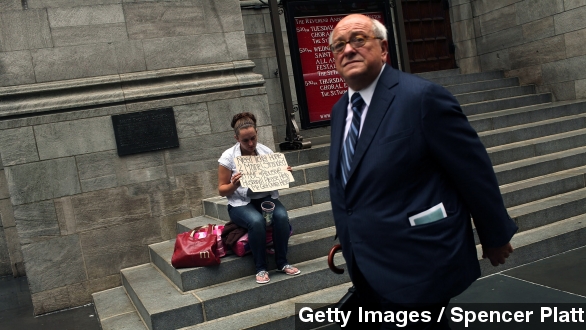 Many economists agreed 2014 was to be the year of economic recovery; and while that was confirmed by most of the indicators put under the microscope this year, a new study by the Pew Research Center finds that recovery has not been equal for all.

The U.S. economy started the year with a whimper and a disappointing 6.6 percent unemployment rate in January.

But that number dipped to 5.8 percent by October after the U.S. economy added at least 200,000 jobs for nine consecutive months, and analysts shifted their focus to a different indicator: wages.

And there was good news there as well, as President Obama noted at a December 5 news conference following the release of November's jobs report.

"Overall wages are rising, a very welcome sign for millions of Americans."

Tack on plummeting gas prices and the economy would appear to be in pretty good shape. (Video via CNN)

But a recent poll shows that 71 percent of Americans are dissatisfied with the direction of the country and fewer than 50 percent think next year will be better. And the finding of last week's Pew study may help explain why.

After reviewing Federal Reserve data, Pew found that wealth disparity has widened along racial and ethnic lines in the U.S. since the Great Recession.

The study showed the median wealth of white households in 2013 was more than ten times greater than that of Hispanic households. Up from 8.7 in 2010.

The disparity was even greater with African-American households, with white households averaging almost 13 times the median household income in 2013, up from 8.3 in 2010.

Wealth is distinct from income, measuring the value of a family's other assets as well — such as homes, and stocks — and as Pew noted, for those measures there was a "stark divide in the experiences of white, black and Hispanic households during the economic recovery."

Minority families were more likely to have their homes foreclosed during the recession and white households are also more likely to own stocks, whose value has recovered more quickly than homes.

And according to FiveThirtyEight's Ben Casselman, in some ways measuring wealth is an even more important indicator of inequality than income alone, saying, "Wealth is what gives families a safety net in case of a lost job or a medical emergency; it's what ensures workers a secure retirement or gives them the flexibility to start a business; and it's what allowed parents to give their children a head start in life."

And as one economist found, despite several positive economic indicators, median wealth for all Americans remained stagnant between 2010 and 2013.

This video includes images from Getty Images and Dafne Cholet / CC BY 2.0.