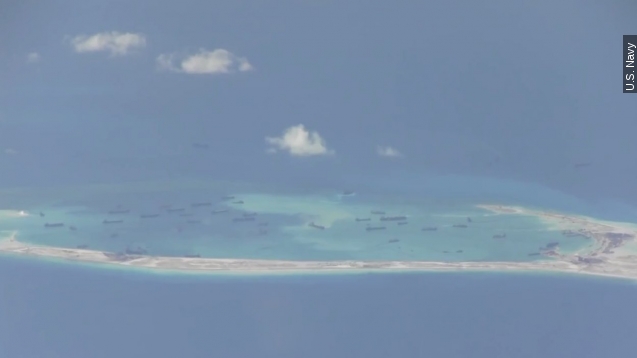 A U.S. warship defied Chinese territorial claims Tuesday and sailed within 12 nautical miles of an artificial island in the South China Sea.

The Chinese island has been called an unsinkable aircraft carrier by some military analysts. The manmade land holds an airstrip, barracks and other military equipment. (Video via U.S. Navy)

"It follows on a step the U.S. took in May this year when it flew a U.S. surveillance plane, and we were on board, directly over these islands to say that the U.S. does not recognize Chinese airspace ...," a security correspondent told CNN.

As Fox News notes, China says almost all of the South China Sea is theirs. Meanwhile, Brunei, Malaysia, the Philippines, Taiwan and Vietnam have declared parts, or all, of the sea as their own.

The U.S. claims neutrality on territorial disputes and says it's only exercising its freedom of navigation. The U.S. Navy frequently patrols the South China Sea, often with Chinese ships close behind, as you can see in this video. (Video via U.S. Navy)

An article published in The Wall Street Journal notes the South China Sea is home to half of the world's shipborne trade. The author also argues historical inaccuracies plague China's so-called "historic rights" to the sea. (Video via Fox News)

Still, it's a little unclear what the U.S.'s endgame is. It's unlikely that China will break up its artificial islands anytime soon.

But as a naval expert told CNN, China's strategy in the South China Sea has been "one of ambiguity." The U.S.'s recent move could force China to clarify its ownership claims, which can then be refuted or defended. (Video via U.S. Navy)