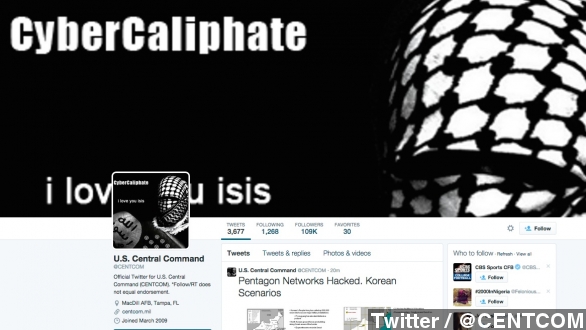 SMS
U.S. CentCom's Twitter, YouTube Hacked By ISIS Supporters
By Jamal Andress
By Jamal Andress
January 12, 2015
The social media accounts of U.S. Central Command, which has been carrying out airstrikes on ISIS since September, were hacked by ISIS supporters.
SHOW TRANSCRIPT

U.S. Central Command carries out America's airstrikes on ISIS. And around noon Central time Monday, CentCom's Twitter account and YouTube channel were both hacked by someone supporting the terror group.

The "Cyber Caliphate," as it calls itself, sent out several tweets from the Central Command Twitter account threatening American soldiers and their families, publishing personal information and releasing what it claims are plans from the Pentagon on North Korea and China. (Video via YouTube / U.S. Central Command, ISIS)

The hackers also put out a video with ISIS propaganda on CentCom's YouTube channel.

The hacker group Cyber Caliphate has reportedly launched similar attacks against local media outlets around the U.S. According to the Columbia Journalism Review, the hacker group took over the Twitter account of Albuquerque Journal in New Mexico last month and that of WBOC-TV in Maryland as recently as Tuesday.

“There is a pretty significant difference between what is a large data breach and the hacking of a Twitter account. … We are still examining and investigating the extent of this incident."

This map — which the hackers tweeted out — was already available on the Federation of American Scientists website.

NBC quotes a Department of Defense official as saying the hack “is clearly embarrassing but not a security threat.”