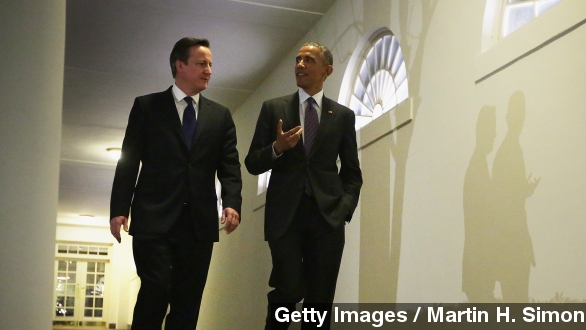 The much-celebrated, decades old special relationship between the U.S. and U.K. has seen its share of war games — they're both members of NATO, after all — but not quite like this.

David Cameron arrived in Washington for a two-day visit Thursday night and announced the two countries will stage a series of cyber war games to help each other learn to counter cyberattacks.

Both Cameron and President Obama have been calling for better tools to fight hackers, and security is one of the main themes of Cameron's U.S. trip. That includes defending businesses and infrastructure from the growing threat posed by hackers.

President Obama has been rolling out proposals to strengthen cybersecurity in the wake of the Sony hack.

"Protecting our digital infrastructure is a national security priority and a national economic priority."

And the U.K.'s intelligence agency released a report saying cyber threats are far more serious than most people realize.

"Four out of five companies reporting attacks with costs running into billions of dollars," CCTV reports.

To tackle the threat, both countries will set aside funding to train cybersecurity specialists before basically turning them on each other.

The BBC has some of the details, saying, "Agents will also co-operate in 'cyber cells' on both sides of the Atlantic. ... The first exercise, a staged attack on the financial sector, will take place later this year."

And the plan seems to be part of a trend. The two countries staged what they called "financial war games" in October, which were basically financial crisis simulations like what we saw in 2008.