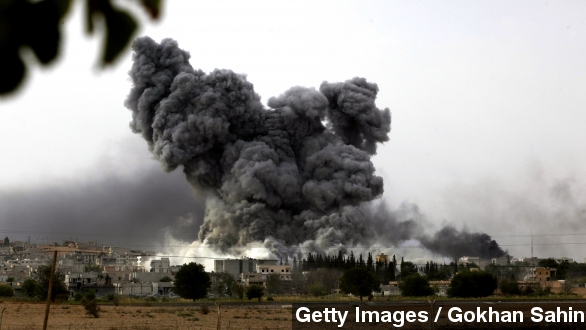 SMS
U.S. And Turkey Sign Agreement To Train, Arm Syrian Rebels
By Kate Grumke
By Kate Grumke
February 19, 2015
The U.S. and Turkey have reportedly signed an agreement to train and arm Syrian rebels in the fight against ISIS.
SHOW TRANSCRIPT

The U.S. and Turkey have reportedly signed an agreement to train and arm Syrian rebels to fight the Islamic State.

The plan has been a long time coming. Back in September, Congress formally authorized President Obama's plan to train-and-equip Syrian rebels to fight against ISIS.

But many lawmakers have voiced concern that American arms will end up in the wrong hands.

According to U.S. officials, the 1,200 rebels the U.S. has identified as potentials for the program are going through many levels of screening, including background checks, psych evaluations and stress tests. (Video via YouTube / adri12345)

Turkey has been a reluctant partner in the fight against ISIS. Although the country is part of the U.S.-led coalition against ISIS, Turkish President Recep Tayyip Erdogan has said he won't intervene in Syria without a commitment from Washington to take out Syrian President Bashar Al-Assad.

But the U.S. Department of Defense reiterated Wednesday that the only enemy is ISIS, despite the fact that these rebels are part of the opposition to Assad. The Obama Administration has said it also wants to see Assad removed from power, but has lately been less assertive. (Video via VICE)

The training program in Turkey could begin as early as March. (Video via CNN)