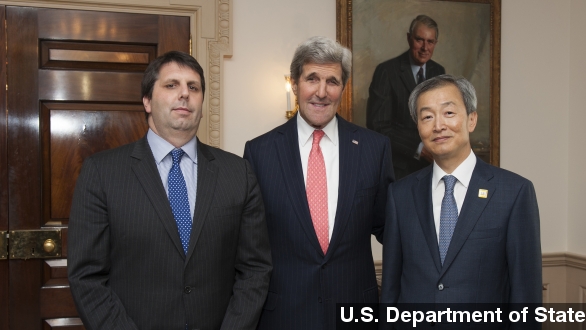 U.S. Ambassador to South Korea Mark Lippert has been hospitalized following an attack where a man with a razor blade reportedly cut his face and wrists.

Lippert, who is 42, was preparing for a lecture at the performing arts center in Seoul when he was attacked by a man who reportedly shouted that South and North Korea should be unified. (Video via YTN)

Images from South Korean news channels show a stunned Lippert being escorted to a hospital, bleeding from his head and hand. They also show the suspected attacker writhing on the ground after being detained. (Video via Korean Broadcasting System)

The attack comes during the annual military drills between the U.S. and South Korea. Those drills have always been viewed unfavorably by North Korea, which supposedly test fired missiles in response.

U.S. Department of State Deputy Spokeswoman Marie Harf appeared on CNN to condemn the attacks. She added that Lippert is recovering and his injuries are not life threatening.