U.S.-Cuba Relations And How Obama Plans To Lift The Embargo 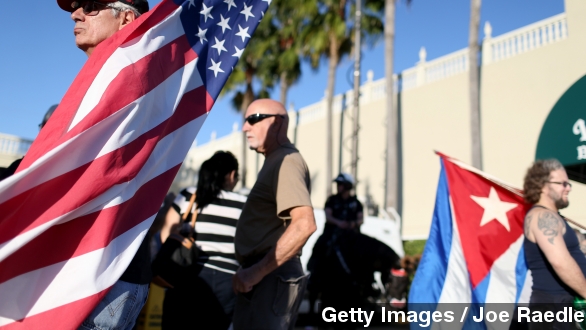 SMS
U.S.-Cuba Relations And How Obama Plans To Lift The Embargo
By Christian Bryant
By Christian Bryant
December 19, 2014
The U.S. embargo against Cuba has a decades-long history. President Obama can gut the embargo, but he'll need Congressional approval to get rid of it.
SHOW TRANSCRIPT

...it's been hard not to talk about the U.S. embargo on Cuba and Obama's proposed shift in relations with the country.

"I think all of us hope Congress will lift the embargo," Rep. Chris Van Hollen said.

"The embargo is not what's hurting the Cuban people. It's the lack of freedom," Sen. Marco Rubio told Fox News.

So, where did the embargo come from in the first place? And, with President Obama's intention to try and get rid of it, what does the White House need to do to make that happen?

President Dwight Eisenhower first imposed a limited embargo against Cuba in the late '50s after the communist country expanded its relationship with the Soviet Union. President John F. Kennedy widened the embargo in 1962 to include all Cuban trade, including food and medicine. Kennedy later imposed travel restrictions to Cuba after the Cuban Missile Crisis in 1963. (Videos via Euronews, National Archives)

According to many, the U.S. embargo against Cuba was also about deposing former President and former Prime Minister of Cuba Fidel Castro — a Marxist leader who violently overthrew the previous government.

In the years following the embargo, Cubans suffered.

"Cuba's economy, once so dependent on its huge neighbor to the north, withered. ... Cubans paid a heavy price in economic hardship and political repression," BBC reporter Paul Adams said.

Fast-forward to 2014, opinions are split on re-establishing ties with Cuba. Some have said the embargo has lasted too long and actually didn't serve its purpose of creating an uprising against Castro.

Others, like Sen. Marco Rubio, believe lifting the embargo would be a mistake.

"It is a victory for the oppressive Cuban government, but a serous setback for the repressed Cuban people," Rubio said.

"The older generation says, 'I feel betrayed twice. First, by Fidel Castro, which caused me to flee Cuba. And now, by my own president, President Obama.' Whereas the younger generation ... they say, 'Look, our president is doing this in the best interest for us,'" Al Jazeera reporter Morgan Radford said.

Obama's plans to shift U.S.-Cuba relations are divisive, but he's vowed to gut much of the restrictions against Cuba himself.

John Kavulich of the U.S.-Cuba Trade and Economic Council told The New York Times, "President Obama is saying, 'I'm going to leave a shell, but it's going to be a proverbial Easter egg — it's going to be hollow.'"

President Obama can establish an embassy, allow for certain banking transactions between Cuban and American institutions and issue general licenses for traveling. What he can't do: completely lift all restrictions for travel and completely get rid of the embargo. He'll need congressional approval for that.

Obama has said he'll work with Congress to make those things happen but — considering early opposition from some Congressional lawmakers — he said Friday it'll probably be a while we'll even see a debate on lifting the embargo.