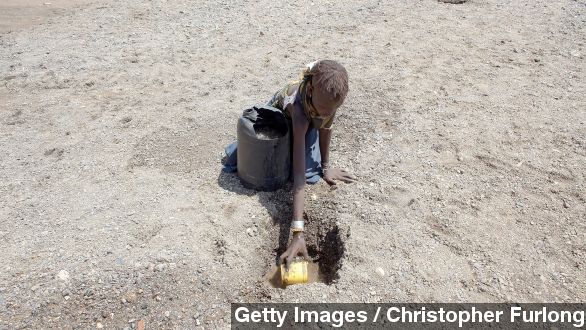 SMS
U.N. Warns Of Water Shortage By 2030
By Ben Levin
By Ben Levin
March 20, 2015
A United Nations report says by 2030, the world will have only 60 percent of the water it needs, the result of population growth and wasteful use.
SHOW TRANSCRIPT

A report released by the United Nations on Friday warned that in 2030, the world might only have 60 percent of the water it needs, a shortfall that could affect 2.9 billion people in 48 countries.

In the words of the report, "Unless the balance between demand and finite supplies is restored, the world will face an increasingly severe global water deficit."

These shortages are already having an impact. In Brazil, a historic drought has combined with a population boom to create a shortage so bad that doctors can't give their patients full dialysis treatments. (Video via BBC)

And here's the thing: Brazil is in one of the most water-rich states in the world. In arid regions it could get much, much worse.

Take the Gaza Strip, where Israeli airstrikes and a lack of investment have made the tap water undrinkable. (Video via Euronews)

"We rang the bell that in 2016 Gaza will be not livable in terms of water resources," said Monther Shoblak, director of Coastal Municipalities Water Utility.

But water shortages don't just impact people where the shortage is. Droughts in places like California could drive up food costs worldwide. (Video via PBS Newshour)

"You know, drought here for us can be a disaster, but you don't see things like you do with an earthquake where things are knocked down and broken," one California farmer told Vice.

So who's to blame? The U.N. points its finger at population growth, along with government policies that prioritize economic development over conservation. Also to blame is global warming, which climate scientists think is already making droughts more common and more severe.

Going forward, experts warn that water shortages could lead to global conflict. The terrorist group ISIS has used its control of upstream water supplies to control downstream Iraqi towns that have no other access to water.

The U.N. report will be released to politicians and policymakers on World Water Day this Sunday.