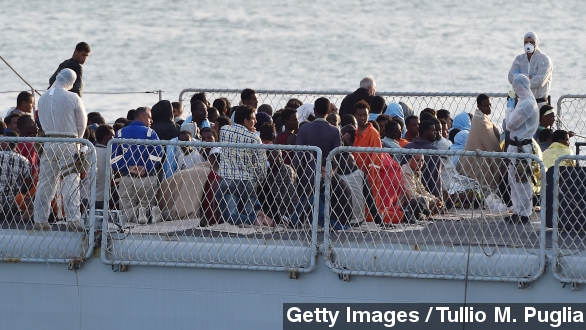 SMS
U.N. Says 3,400 Migrants Died Crossing Mediterranean In 2014
By Christian Bryant
By Christian Bryant
December 10, 2014
The U.N. High Commissioner for Refugees said Wednesday the world must do more to mitigate deaths of migrants traveling to safety by sea.
SHOW TRANSCRIPT

Violent conflicts in Ukraine and parts of the Middle East have led to hundreds of thousands of refugees taking flight to other countries for safety this year.

But the routes taken to those other countries can be treacherous. The United Nations Refugee Agency reported Wednesday thousands have died just this year attempting to travel to safety by sea. And the Mediterranean is the most dangerous sea route of all.

In Geneva, Switzerland, U.N. High Commissioner for Refugees António Guterres said many people are fleeing their country in "despair" as they've been driven out by "conflict and persecution."

Take Syria, for instance. 3.2 million Syrians have been displaced since the beginning of the country's civil war, which began in 2011. (Video via CBS)

But there's another problem: Guterres said countries receiving refugees have the wrong attitudes about sheltering foreigners: "Focusing only on border control and deterrence will not solve the problem. It is the duty of any government to ensure security and to manage immigration, but these policies must be designed in a way that human lives do no end up becoming collateral damage."

Although, Guterres said countries must do more at a time when an "unprecedented number of people" are fleeing their home countries for safety, he added there are several organizations helping to mitigate the number of refugee lives lost at sea.

The Italian Navy reportedly saved more than 160,000 lives this year as a part of a rescue initiative. And 408 migrants, mainly Syrians, were recently rescued by a Spanish vessel and an Icelandic ship after drifting six days in the Mediterranean. (Video via CNN / Italian Navy)

Also this week, governments meeting in Geneva pledged to collectively take in 100,000 Syrians due to what Guterres called an ongoing "humanitarian challenge."