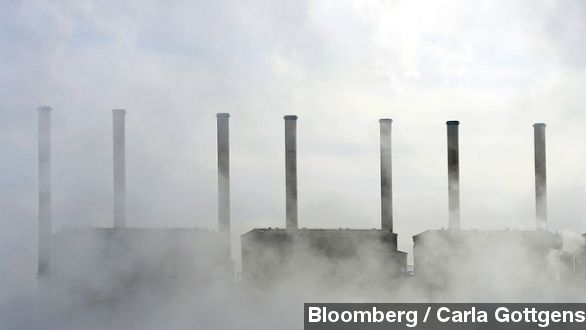 SMS
U.N. Report: World Must Cut Carbon Emissions By 2030
By Matt Picht
By Matt Picht
January 16, 2014
A leaked report from a U.N. research group suggests the world has until 2030 to cut carbon emissions before the problem becomes almost unsolvable.
SHOW TRANSCRIPT

A leaked draft of a new U.N. report says the world has 15 years to deal with carbon emissions before the problem becomes nearly impossible to solve.

The U.N.'s Intergovernmental Panel on Climate Change is currently working on its Fifth Assessment Report, a comprehensive study of climate change published in three segments.

The first part of the assessment report was published in September 2013 and concluded human activity is the main cause of climate change. The second segment of the report is set to be published in March and is likely to conclude that climate change threatens food supplies, according to The New York Times.

The third segment won't be published until April, but The Times obtained an early draft copy. Although the report isn't finalized yet, its conclusions are unlikely to change.

The draft urges world governments to significantly curb their carbon emissions by 2030 in order to meet the U.N.'s limit on atmospheric carbon dioxide. After 2030, the only way to reach that goal would be to suck carbon back out of the air — a very impractical and expensive solution.

The Verge says time is running out for the world to address the situation: "The panel's findings have become increasingly dire, and it's clear that governments will have to act soon if they want to prevent its next report from having an even bleaker outlook."

But even trying to hit the U.N.'s current goal will be a pricey task. Businessweek notes the U.N. report also estimates containing climate change could cost up to 4 percent of the world's total GDP by 2030.

And the issue hasn't gotten much public or political attention in recent years. According to a recent Media Matters study, major broadcast networks devoted less than two hours of their combined nightly news coverage in 2013 to climate change.

A finalized synthesis of all three parts of the IPCC's report is scheduled to be released in Copehagen in October.