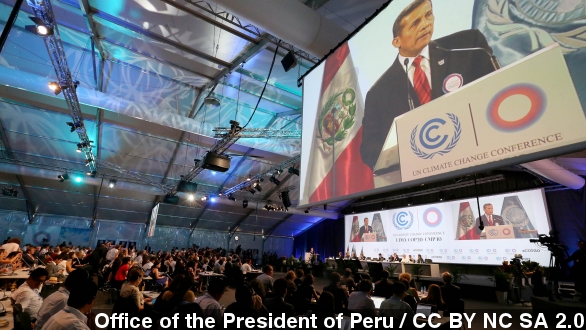 The U.N. climate conference in Lima has ended in familiar territory: a compromise that everyone agrees to, but nobody's really crazy about.

Once again it was the divide between developed and developing nations that led to the latest agreement, which critics have called watered down. (Video via COP20 Lima)

But why exactly are so many people perceiving the latest compromise as weak? All the revisions probably haven't helped.

Those revisions took out the two degree Celsius limit on global climate increase, which has been the U.N.'s goal since the Copenhagen conference in 2009.  (Video via CCTV)

As The Guardian points out, the draft presented Sunday morning, "made no mention of industrialized countries’ responsibility towards the small island states which are under threat of being drowned by rising seas."

And it took delegates an extra two days to come up with the weakened compromise, working overnight Saturday, well past Friday's original deadline. (Video via NHK World)

But even though the agreement has disappointed many, it's not exactly the end of the world — at least, not just yet.

Lima's conference was intended to lay the groundwork for next year's conference in Paris, where all 190 countries are expected to agree on a final, legally binding agreement on climate change. (Video via World Wide Fund for Nature)

"So the setting of the targets is critically important to set that long-term signal so that industry can respond to it," Dr. Graeme Sweeney told CommentVisions.

Now, the remaining hope is that countries will be able to strengthen the drafted agreement between now and that conference next year, starting on November 30.