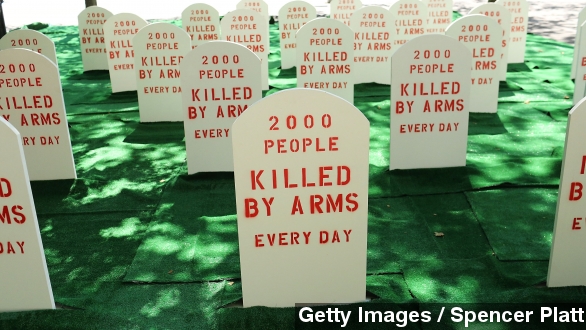 More than eight years after the United Nations started the process of drafting a treaty to regulate the international arms trade — said treaty has come into effect. (Video via U.S. Department of Defense)

The 12-page U.N. Arms Trade Treaty aims to crack down on the illegal arms trade, mainly through monitoring and reporting sales of conventional weapons — from handguns to tanks. (Video via BBC)

The U.S. is one of 130 countries that has signed the treaty, but not in the 60 that have ratified it, because that would require congressional approval, and that doesn't look too likely. (Video via U.S. Department of State)

Republicans, a few democrats — and the National Rifle Association — have stood in opposition to the treaty, claiming that it infringes on Americans' right to bear arms.

It was even included as a provision, way down on page 213 of the government spending bill the president signed earlier this month, stipulating none of the money from the bill could be used toward implementing the arms treaty, until the Senate ratifies it.

That's all despite the fact that on the first page of the arms treaty, it reaffirms countries' rights to control conventional weapons according to their own constitutions, and make no attempt to infringe on those rights.

In other words — the ATT wouldn't affect the sale of weapons domestically. So what's the beef with a treaty that will have no effect on how guns are bought and sold within the U.S.? Basically, the National Rifle Association.

NRA Executive Vice President Wayne LaPierre said, "We are not going to let our great American freedoms be reduced to some global common denominator."

The NRA has lobbied hard against the treaty, specifically because it says the treaty would allow for the de facto creation of a gun owners registry.

That's been helped by scare emails, like this one retrieved by Snopes, which warns, "The Obama administration intends to force gun control and a complete ban on all weapons for US citizens through the signing of international treaties with foreign nations."

China, one of the biggest buyers, also hasn't signed the treaty and major arms manufacturer Russia hasn't even signed the treaty, arguing it's weaker than existing regulations and wouldn't be effective. (Video via Kalashnikov Concern | China Administration of Press, Publication, Radio, Film and Television)

That's a prominent argument among critics of the bill, like The Guardian's Ben Doherty, who argues, "There are too many weapons already across the globe, and too many legitimate uses that governments – and others – can claim for them. No weapons will be collected and destroyed by this treaty."

Oxfam's Martin Butcher told Al Jazeera, "We're going to learn a lot of information that hasn't previously been available ... The more we know about the legal trade, the harder it will be for arms to get into illicit markets."

And there are positive signs for treaty supporters: half of the world's top ten manufacturers, including the United Kingdom and Germany have ratified the treaty.