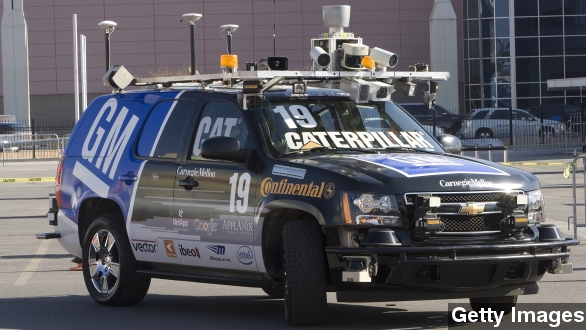 By Madison Burke
July 30, 2014
Driverless cars could soon become a staple on U.K. city streets, as they're set to be introduced to a few cities in 2015.
SHOW TRANSCRIPT

Imagine reading the paper, doing a crossword puzzle or even taking a nap while your car drove you to work by itself. For U.K. citizens, that may soon be a reality.

The government says it is going to allow driverless cars on public roads. Currently, these vehicles are just allowed on private roads. (Via ITV)

The cars will be introduced to just a few cities next year in a sort of test run. (Via Sky News)

The U.K. Department of Transportation points to the driverless cars potentially helping reduce traffic, improve safety and being environmentally friendly. Business Secretary Vince Cable also told the BBC he hopes this will make the U.K. a leader in the automotive industry.

CABLE: "We want Britain to be a center of research. We want our own car industry to be ahead of the field."

​The vehicles are already legal and on the streets in Japan, Singapore and Germany. But only four states have legalized the cars in the U.S. (Via RT)

Although the topic is in legislation in some states, most of the U.S. has no plans to make laws legalizing the vehicles. (Via Mojo Motors)

Though they actually might not be illegal in the first place. GlobalAutoRegs reports an international law requires every vehicle to have a driver that is able to control it. Since most driverless cars are able to be overridden by the driver, it's unclear if they even violate this law.

And Mojo Motors reports, "In terms of automotive laws, anything not clearly prohibited is technically allowed."

But how do these cars even work? Google probably explains it best.

"While we take in a ton of information using our sensors, it's our software that really processes all of this and differentiates between objects. ... Cyclists will be red, pedestrians yellow and the vehicles will appear as either green or pink." (Via Google)

The driverless vehicles will hit British public roads in January.