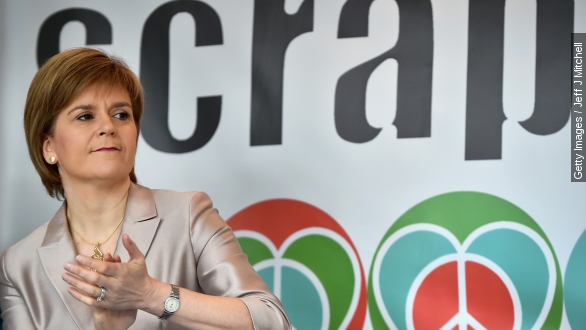 It's election season in the U.K., and this week, the spotlight was on minority party leader Nicola Sturgeon — for better and for worse.

Sturgeon is the leader of the Scottish National Party, the party behind last year's unsuccessful bid to separate Scotland from the rest of the U.K. She took over from previous leader Alex Salmond in November.

The party's new leader started making waves this week after she stole the show during the ITV leaders' debate Thursday.

Sturgeon said, "I think we've seen tonight from this discussion why we really need to break the old boys network in Westminster because, frankly, none of these guys can be trusted when it comes to tuition fees."

Her strong performance earned Sturgeon a hero's welcome back in Scotland, which is important because the region could end up being the key to this year’s elections.

Her party is projected to pick up more than 50 seats in Parliament during the general election, which would give it enough leverage to form a coalition government with the Labour Party and oust the Conservative Party from power.

So Sturgeon could end up holding the balance of power in Parliament, and she's currently riding a wave of support from left-wing voters across the U.K. The only thing currently standing in her way is The Telegraph.

That comment would be a big blow to Sturgeon, who's built her campaign platform on Scotland’s strong anti-Conservative sentiment. It would also erode support for her party from Labour voters across Britain.

The Telegraph's article has put Sturgeon on the defensive. She's since denied making those comments.

Sturgeon told the BBC, "There is no attraction to me whatsoever of a Tory government."

She’s accused the government of "dirty tricks" and called for an inquiry into how the memo was leaked. (Video via STV)

And she repeated her call for a coalition government with Labour in a Guardian op-ed, calling on party leader Ed Miliband to "Join with us in locking David Cameron out of Downing Street."

Miliband, who has been strenuously resisting the idea of a Labour-Scottish National Party coalition, is seizing on the memo to try and claw back some of SNP's momentum.

If Sturgeon does make inroads into the U.K.'s next government, she's likely to push for more autonomy for Scotland and a freeze on the country's Trident nuclear program.