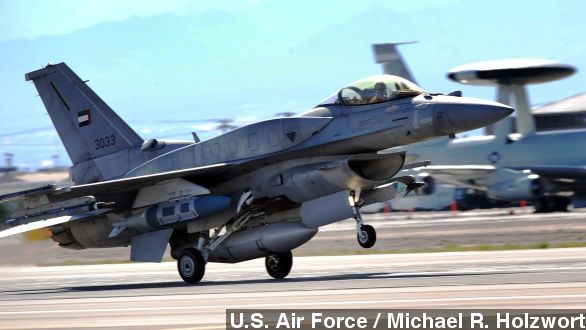 After suspending its participation in U.S.-led airstrikes against ISIS, the United Arab Emirates said Saturday it would rejoin the coalition's effort by sending fighter jets to Jordan. (Video via U.S. Central Command)

But when an ISIS video of al-Kasasbeh's brutal murder surfaced earlier this week, U.A.E. responded by deploying a squadron of F-16 fighter jets to the coalition. (Video via YouTube / jaba149)

The U.A.E.'s official news agency referred to the country's "unwavering and constant solidarity with Jordan" as a reason for sending support.

The U.A.E., which provides air bases used by U.S. and coalition forces, is sending jets but stopped short of saying whether it would be taking part in coalition airstrikes.

But The New York Times reported earlier this week the U.A.E. is asking the U.S. to station Osprey aircraft in northern Iraq for search-and-rescue missions. (Video via U.S. Department of Defense)

Although the U.A.E. hasn't said yet whether it will again fly airstrikes, Jordan has carried out over 50 strikes on ISIS targets in just three days, reportedly focusing on the militants' stronghold in the Syrian town of Raqqa. (Video via Jordanian Royal Air Force)