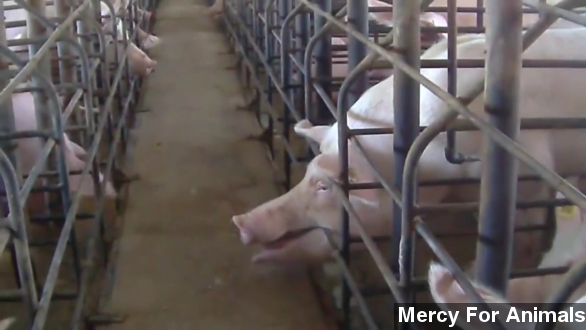 By Briana Koeneman
November 23, 2013
Tyson Foods has terminated its contract with an Oklahoma pig farm after a video was released of workers abusing the animals.
SHOW TRANSCRIPT

Tyson Foods has terminated its contract with an Oklahoma pig farm after video was released of workers abusing the animals. We want to warn you, the images are disturbing.

The more graphic sections show them gouging pigs' eyes, slamming baby pigs into concrete, and one worker even throws a bowling ball at an animal's head.

NBC, which had obtained the video, showed it to Tyson Foods, and the company immediately cut ties with the farm.

A spokesperson for Tyson said: "We're extremely disappointed by the mistreatment shown in the video and will not tolerate this kind of animal mishandling. ... [We] will take possession of the animals remaining on the farm." (Via NBC)

The owner of West Coast Farms told the outlet he's already fired the workers seen in the video. (Via KNWA)

But that might not be enough. Mercy For Animals has called for criminal charges to be filed against the farm.