Typhoon Noul Expected To Be Less Severe Than 2013's Haiyan 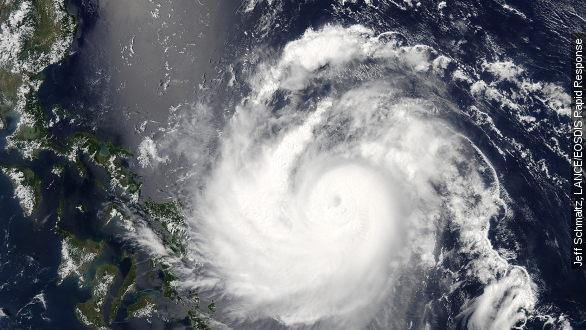 SMS
Typhoon Noul Expected To Be Less Severe Than 2013's Haiyan
By Evan Thomas
By Evan Thomas
May 10, 2015
The storm is bringing 160 mph winds and some 20 inches of rain to the Philippines.
SHOW TRANSCRIPT

Typhoon Noul made landfall in the Philippines Sunday, where authorities have evacuated more than 1,200 people so far.

"People today have been finalizing their preparations, closing up their shops and boarding up windows. The hotel I'm in, for instance, has been evacuating residents from the beachfront areas further inland, so people here are taking it very seriously," storm chaser James Reynolds told CNN.

Noul is lashing the northern Philippines with sustained winds of 160mph. Forecasts call for as much as 20 inches of rain in two days.

"After making landfall, Noul is expected to take a right-hand turn and weaken as it tracks toward Japan." (Video via Sky News)

Aid groups staged relief materials in areas expected to need them ahead of time. One told The Wall Street Journal "Our goal is zero casualty."

It could help that northern areas are more sparsely populated than urban regions in the southern Philippines, but as CNN reports, the area is also more mountainous and could amplify the effects of heavy rains. (Video via NOAA)

In either case, Noul has so far had much less impact than Typhoon Haiyan in 2013, which killed more than 6,000.

A 17-foot storm surge from Haiyan inundated the southern city of Tacloban and destroyed a large percentage of its buildings, according to local officials. (Video via BBC)