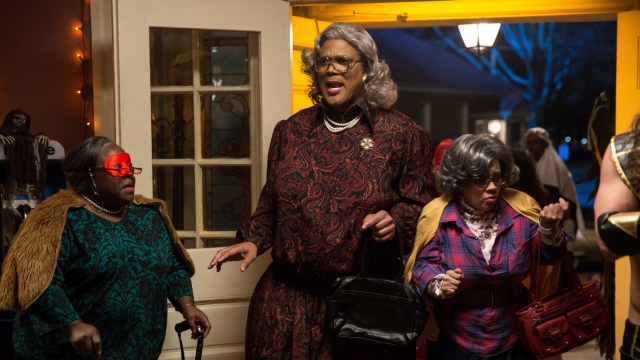 Tyler Perry has released the seventh "Madea" movie, and it hit No. 1 at the box office. You know what they say: If it ain't broke ... let it progressively get worse over time.

"Boo! A Madea Halloween" brought in an estimated $27 million — a solid opening for an inexpensive film with rough reviews.

But that's generally the "Madea" movie formula. No matter if she goes to jail, to a family reunion or to witness protection, you can count on a low-budget, low Rotten Tomatoes score and high ticket sales.

Over the course of a decade, Perry and his loudmouthed alter ego have made just over $400 million worldwide from feature films alone. Well done, sir.

And the below-average hits just keep on coming. Taking the No. 2 spot this week is a "Jack Reacher" sequel nobody asked for, bringing in an estimated $23 million and inching its way to a 40 percent Rotten Tomatoes score.

SEE MORE: A Movie About Being An Accountant Manages $24M In Its Box Office Debut

At No. 3 is the real surprise of the weekend, a prequel that is worlds better than the original. "Ouija: Origin of Evil" brought in an estimated $14 million but is crushing it with critics, boasting an 81 percent Rotten Tomatoes score.

"The first one of these was clearly kind of a throwaway movie, and we see plenty of movies that people are just slapping them together, but somebody cared about this one, and it shows," Matt Atchity said on "What the Flick?!".

While the original film was a great investment, ultimately raking in more than $100 million on a $5 million budget, it was panned by critics.

This latest installment is a similarly cheap film, but this time, it's actually worth the price of admission, which should give it some legs at the box office.

As for next week, you've never seen museums quite like those in "Inferno."