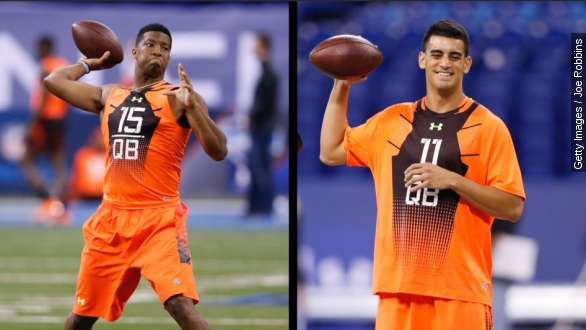 SMS
Two Top NFL Prospects Likely Won't Attend The Draft
By Matt Moreno
By Matt Moreno
April 1, 2015
Marcus Mariota and Jameis Winston both say they'll stay with their families instead of going to the draft. Is that a problem?
SHOW TRANSCRIPT

This may be the first time in a long time the first few teams to pick in the NFL Draft this month won't get a chance for a photo op with their newest players.

According to reports, both quarterback Jameis Winston and now Marcus Mariota will stay home with family instead of attending the NFL Draft in Chicago.

"Both of them should be there. ... Both of these guys are going to be top five picks, so I don't know why they're not going," CBS Sports' Boomer Esiason said.

Traditionally, the NFL invites a handful of draft prospects every year to attend the ceremony live, in-person. They're prospects expected to go early in the first round, though that doesn't always work out.

Last year, quarterback Teddy Bridgewater waited until the last pick of day one when the Minnesota Vikings called his name.

And the year prior, current New York Jets quarterback Geno Smith debated leaving the city altogether after he wasn't selected in the first round as expected.

While it's rare for prospects to decline the NFL's invite, it does happen — just usually not from the top two players in the draft. But both decisions reportedly have less to do with fear they won't get drafted early and more to do with putting family first.

Jameis Winston told the NFL Network after his pro day earlier this week he's likely going to stay home in Alabama to be with his grandmother who has Type 2 diabetes and is unable to travel.

Mariota is in the same vein. The Hawaii native is expected to stay at home with his family instead of going to the draft.

Which is fine, but it still stings a bit, as this is the first time the NFL has moved the draft out of New York City since 1965. ESPN's Adam Schefter writes, "The NFL had been hoping to prop up Chicago, but the top quarterbacks have declined the invitation."

Maybe it's a fluke, or maybe it's something else. Both Winston and Mariota likely won't be shying away from the spotlight, though. Both are expected to let camera crews from ESPN and NFL Network into their homes.