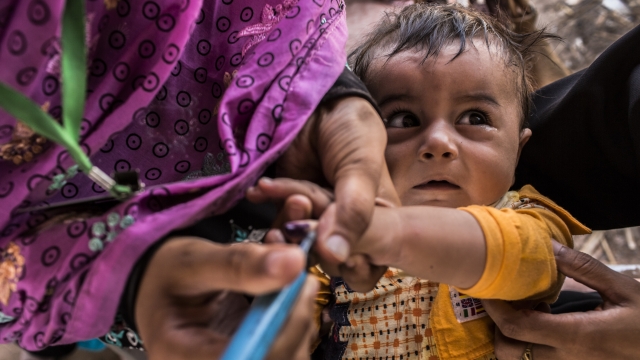 Nearly two-thirds of the world's unvaccinated children are living in conflict areas, according to new data from UNICEF.

South Sudan, Somalia and Syria are among the areas with the highest concentrations of children living without basic vaccines. Syrian immunization levels have dropped from 80 to 43 percent since the war there started five years ago.

The chief of immunization for UNICEF, Robin Nandy, says children can't get basic vaccines in those areas because sometimes clinics are deliberately targeted.

Afghanistan closed 19 clinics in 2015 because of threats. It and Pakistan are the only two countries currently affected by polio.

The World Health Organization reports that over half of Syria's public hospitals are only partially operational or have closed because of the increase in attacks on clinics.

Most recently, UNICEF has announced a new campaign in Syria to vaccinate children and has rolled out a worldwide polio immunization program.

This video includes images from Getty Images and clips from UNICEF and Doctors Without Borders.