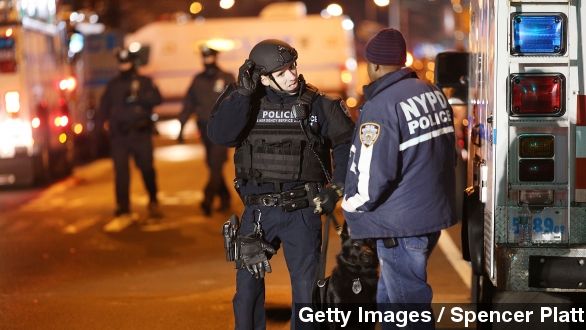 Two New York City police officers were shot and killed as they sat in their squad car Saturday in an apparent ambush.

New York Mayor Bill deBlasio told reporters, "When a police officer is murdere, it tears at the fabric of our society

According to police, the suspect opened fire into the officers car as they patrolled a Brooklyn neighborhood. The shooter then fled into the subway, where he apparently died of a self-inflicted gunshot wound.

The suspect has been tentatively identified as Ismaaiyl Brinsley, a 28-year-old Baltimore man who's believed to be behind a now-shuttered Instagram account boasting about wanting to kill cops.

The shooting comes as the NYPD is facing severe public backlash for the choking death of Eric Garner. And plenty of people have linked Saturday's shooting to the nationwide protests against police violence.

"This could not have come at a worse time. There seemed to be some progress being made through the protests. ... No one I spoke with, no one I marched with, no one I stood next to would have called for the loss of life of officers," local council member Robert Cornegy told WPIX.

Former NYPD detective Gil Alba told Fox News, "The fact that all these protesters and all that, and 'Kill cops' and 'Kill NYPD,' you know that has an effect on people at home."

Rev. Al Sharpton, a key protest organizer, released a statement on behalf of the Garner family saying, "We are outraged by the early reports of the police killed in Brooklyn today. ... We have stressed at every rally and march that anyone engaged in any violence is an enemy to the pursuit of justice for Eric Garner and Michael Brown."

The last shooting death of an NYPD officer came in 2011, when Peter Figoski was shot and killed responding to a break-in