Not One, But Two Hurricanes Are Barreling Toward Hawaii's Big Island 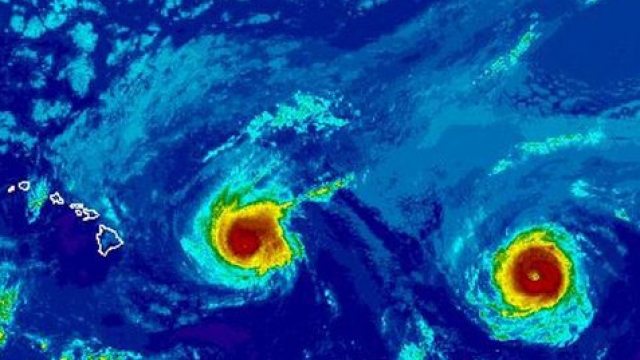 Not one, but two powerful hurricanes are making their way toward Hawaii's Big Island.

And if either storm makes landfall, it would be the first hurricane to hit that island since records began in 1949.

First in line is Hurricane Madeline. As of late Tuesday night, the storm had maximum sustained winds near 90 miles per hour, making it a Category 1.

Forecasters say Madeline should continue to weaken as it approaches land. But it's still expected to get dangerously close to the Big Island on Wednesday and Wednesday night.

"This looks like potentially the strongest tropical cyclone, which includes hurricanes and tropical storms, to approach very close to the coast in the past several years," Central Pacific Hurricane Center meteorologist Chris Brenchley told KHNL.

Experts say Madeline could wreak even more havoc on the island than Tropical Storm Iselle in 2014, which caused millions of dollars in damage.

And right on Madeline's heels is Hurricane Lester.

The storm maintained its Category 4 strength Tuesday night as it moved toward the central Pacific, but it was still about 1,000 miles east of the Big Island.

Meteorologists have described the double hurricanes as an unprecedented situation, especially since hurricanes in general are pretty rare in Hawaii.

That's because a high-pressure feature is normally positioned northeast of the islands, which helps deflect storms and keeps the weather there consistent all year.

And that high pressure stays strong during prime hurricane season, which starts in May and goes through October.

But it doesn't look like Hawaii will be able to skirt these storms. Gov. David Ige signed an emergency declaration Tuesday, and residents are beginning to stock up on food and water.