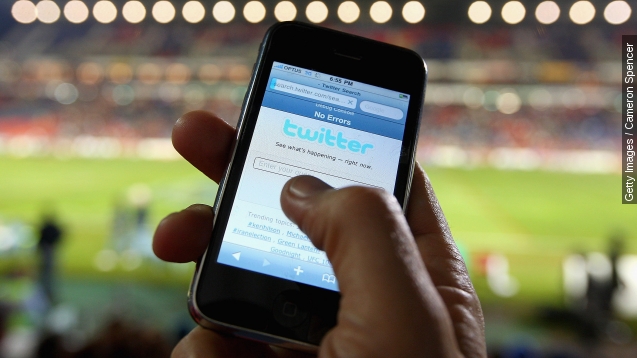 Twitter is a space for expression, whether that comes as text, photo, video — or GIF.

Turns out, Twitter is also a place for robots to express themselves. (Video via CBS)

They're called twitterbots, and, no, they're not self-aware.

Bots are created using Twitter's API, which is basically just a guide for how to build programs and get those programs to work with Twitter's platform.

So a person could create a bot that favorites all tweets containing a certain keyword. Or something more complex, like in the case of Quilt Bot or Congress Edits.

When users tweet pictures at Quilt Bot, it reproduces the pictures and makes them look like they're made from fabric. It's pretty harmless and it's kind of fun. And the Congress Edits bot tweets every time someone at a U.S. Congress IP address edits a Wikipedia page — which can be hilarious.

But other twitterbots have a shadier purpose. They're usually referred to as spam bots, and they give the people who use them the illusion of having a ton of followers. They're basically "follows" for sale.

The company Buy Real Marketing, which is only one of many that sells spam bots, quotes a price of $9 for 1,000 bot followers — which costs less than a penny each. That same company offers a similar service for Instagram and will also pad your numbers for YouTube or Soundcloud plays.

What might be more scary is some of these very fake accounts can pass as human —meaning real people are unknowingly tweeting at a bot.

The YouTube channel Escape and Control met up with Tim Hwang, director of the Web Ecology Project. Hwang tested if an army of Twitterbots could pass as real Twitter users.

"What you're seeing here is the 500 people that were the targets. ... What you're able to see is that, in a two-week period, the bots are actually able to twist that social network of 500 people," Hwang said.

And some of these Twitterbots are even better at Twitter than you. Take this "socialbot" study, for example.

It looked at the growth of 120 bots' networks over a month. "More than 20% of the socialbots acquired more than 100 followers," which, Fast Company pointed out, "is higher than the follow number for about 50 percent of all Twitter users."

Now you know what a Twitterbot is, don't feel like you're hurting the bot's feelings if you decide to block them, report them as spam or just ignore them completely. Actually, Twitter encourages those things.