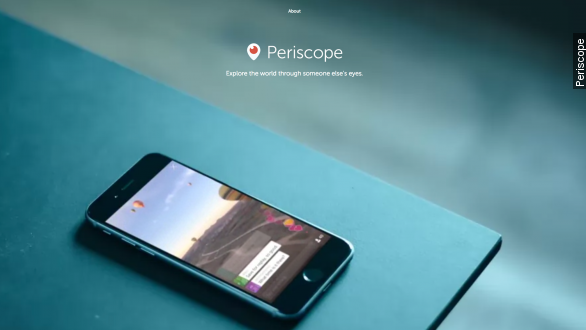 SMS
Twitter Launches Periscope As iPhone Live Streaming Heats Up
By Evan Thomas
By Evan Thomas
March 26, 2015
Twitter's streaming app launched later than Meerkat, which build up steam during South by Southwest. Which will come out on top?
SHOW TRANSCRIPT

Anyone with an iPhone can now broadcast whatever their iPhone's camera sees in real time.

But Periscope's target market is already busy. Thanks to South by Southwest, live-streaming-via-mobile is the new app du jour. And at the Austin-based tech conference this month, Meerkat was the poster child. (Video via USA Today)

Meerkat does basically the same thing Periscope does: on-demand live-streaming. (Video via CNET)

Twitter bought Periscope and brought its team on board just before Meerkat took off. It then cut off Meerkat's access to Twitter's social graph, through which Meerkat had imported whole lists of friends and followers. (Video via CBS)

Without the social graph, sharing streams on the service will require more effort and might make it harder for Meerkat to hold onto users as a result.

But amid the high drama is the makings of competition. While Meerkat was first to market, Periscope co-founder Kayvon Beykpour told TechCrunch there's still plenty of space for his app to find an audience.

A writer at BuzzFeed notes, "While Meerkat is still seeing huge growth, according to [founder Ben] Rubin, Twitter has the ability to put Periscope in front of hundreds of millions of people who have never even heard of Meerkat, much less installed it."

There are also more technical differences: Periscope supports native replays, for example, compared to the single broadcasts of Meerkat.

The Verge says this could give users a reason to stick around because Periscope "is an app that can actually be browsed."

"I've clicked on too many Meerkat feeds on Twitter only to discover the stream has ended," says a writer at The Next Web. "Eventually I've stopped clicking on any Meerkat links that are more than two minutes old."

It's still early days for both apps. Re/code reports Periscope could eventually be integrated directly into Twitter.

And despite being locked out of Twitter, Meerkat's doing all right for itself. This week it secured $12 million in fresh funding.

Both apps are available now on the iOS app store. Meerkat also has an Android app, and Periscope is said to be working on its own version.

This video includes music from Deal The Villain / CC BY NC ND 3.0.