TV Has LGBT Characters, But They're Not So Racially Diverse 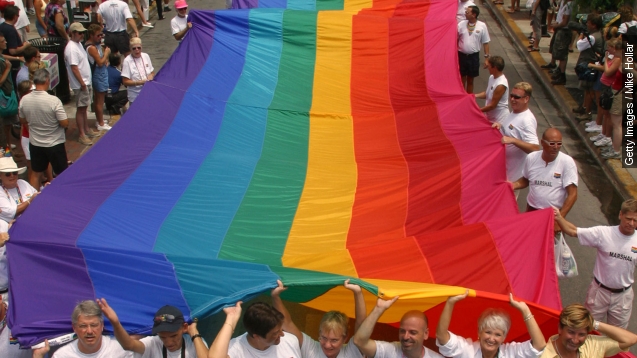 SMS
TV Has LGBT Characters, But They're Not So Racially Diverse
By Ryan Biek
By Ryan Biek
October 27, 2015
The Gay and Lesbian Alliance Against Defamation's annual "Where Are We on TV" report found television still lacks racially diverse LGBT characters.
SHOW TRANSCRIPT

Of the many routes to social change, entertainment can be the path of least and most resistance. (Video via Netflix / "Orange Is the New Black")

Gay and Lesbian Alliance Against Defamation just released its annual report, and found 4 percent of the broadcast prime-time scripted television regular characters in episodes aired between June of this year and May of next are lesbian, gay, bisexual or transgender. (Videos via ABC and Fox)

The upcoming year will feature 20 more regular LGBT characters on cable shows than last year, and for the first time, sites like

Amazon, Hulu and Netflix were counted. Together, their original shows will have 43 regular LGBT characters. (Video via ABC Family)

GLAAD's CEO and President Sarah Kate Ellis said, "Each of us lives at the intersection of many identities and it's important that television characters reflect the full diversity of the LGBT community."

The study found the highest percentage of black characters overall on broadcast programming that GLAAD has ever recorded. But the group says black women are still significantly underrepresented. Forty-one percent of black characters are female. (Video via ABC)

Overall, racial diversity improved, with a 6-point jump in characters of color. But when it came to the racial diversity of LGBT characters, over 70 percent on both cable and streaming services were white. (Videos via ABC and Netflix)

The study also noted there were no transgender characters on prime-time broadcast programming. And of the seven between cable and streaming services, only one was a transgender man. (Video via Amazon Studios)

In a broad way, however, the number of LGBT characters falls in line with statistics.

A May Gallup poll found just under 4 percent of Americans identify as LGBT. Yet, Americans estimated, on average, 23 percent of the public was gay or lesbian. It's an over-inflation that's not much different from estimates in 2011 or 2002.

However, changes in attitudes have followed increases in LGBT characters. Gallup found 38 percent of Americans said being gay or lesbian was morally acceptable in 2002. The number today has jumped to 63 percent.

Though GLAAD's president argued that "it is not enough to just include LGBT characters; those characters need to be portrayed with thought and care to accurately represent an often tokenized community."

With the group arguing gay, lesbian, bisexual and transgender people all have different experiences, Ellis added, "There are still plenty of stories about our community yet to be told." (Video via GLAAD)