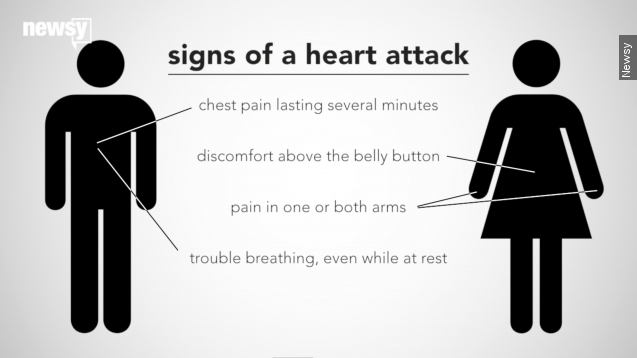 Being a couch potato can pay off ... sometimes. A 71-year-old Massachusetts man realized he was having a heart attack because of a show he watched called "Save My Life."

"Last Sunday, Mower was watching an episode of the show about a man who thought he had a simple case of heartburn. ... Mower was experiencing similar symptoms," the ABC anchor said.

"The doctors in there were fantastic," Mower said.

Dana Mower went to the emergency room at Brigham and Women’s Hospital in Boston, the same hospital featured on the episode of the real-life medical show.

And get this — Mower was cared for by one of the doctors on that very episode. He said the two laughed about the coincidence.

"I was just watching you last night on TV," Mower said.

And experts say TV isn't good for you.

But if you're not up on TV medical dramas, here are some signs of a heart attack: chest pain or discomfort that lasts for more than just a few minutes; discomfort above the belly button; pain in one or both arms; and trouble breathing, even if you're just resting.

And TV has helped out docs, too. One doctor who was a fan of the show "House" diagnosed a rare condition thanks to a similar scenario on the show.

But back to Mower. He is going to need surgery because of the heart attack.