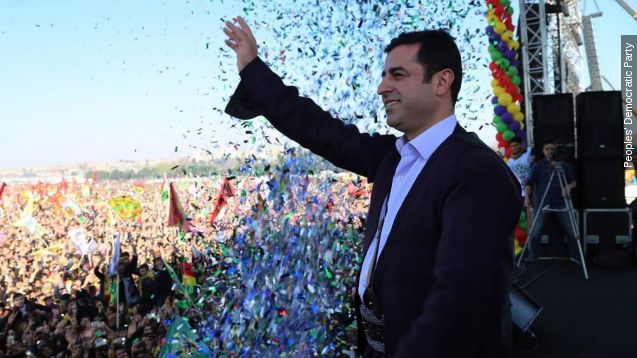 What does Turkey’s election mean for the Kurds? (Video via Peoples’ Democratic Party)

Turks head to the polls on Sunday, but unlike previous elections, this one has the potential to give Turkey’s Kurdish minority a bigger say in the country’s politics. (Video via Peoples’ Democratic Party)

That’s because of the Peoples’ Democratic Party, or HDP. (Video via YouTube / Işık organizasyon antep)

The party’s ideology is left-wing, secularist and pro-Kurdish. And it’s poised to grab the necessary 10 percent vote needed to enter parliament.

If the HDP manages to get the 10 percent vote it needs, then it’ll gain up to 60 seats in Turkey’s 550-member parliament.

The HDP's also the biggest obstacle for the current ruling party’s plan to radically alter the country’s constitution in order to give more power to Turkey’s president, Recep Tayyip Erdoğan. (Video via YouTube / Erdoğan Gönüllüleri)

The HDP’s co-leader, Selahattin Demirtas, has promised to oppose the constitutional change, but first he needs to get elected. To do that he's been downplaying ties to the Kurdish Workers’ Party, or the PKK.

The PKK is a Kurdish nationalist movement and paramilitary group founded in the late '70s. For years, it has fought against the Turkish state in hopes of creating an independent Kurdish region. (Video via Claudio von Planta / CC BY NC SA 3.0)

More recently, though, the PKK has engaged in peace talks and now seeks more autonomy for the Kurdish regions of Turkey in the south instead of an independent state. (Video via Panos Pictures / ‘Fire in the Mountains’)

Any ties to the group may dissuade voters who remember the PKK’s violent past, and the HDP hasn’t been able to completely detach itself from the group.

Still, the HDP appears to be in position to seize a portion of the Turkish parliament. And that means Erdoğan may soon have more to worry about than cockroaches forcing him to build his new 1,150-room presidential palace. (Video via TVNet)