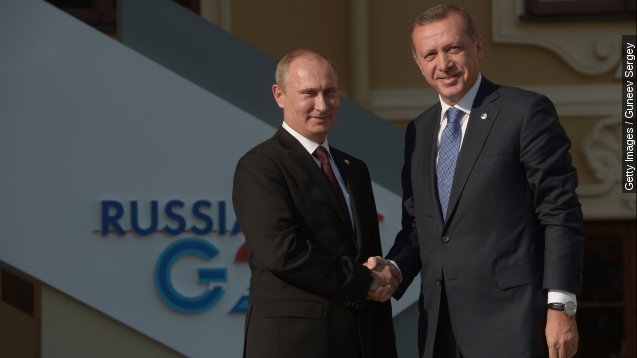 By Elizabeth Hagedorn
May 21, 2015
For all the attention President Recep Tayyip Erdogan receives, you'd hardly know Turkey has a prime minister.
SHOW TRANSCRIPT

A 60-something-year-old European leader with unchecked ambition, bent on crushing his opposition. No, we’re not describing Vladimir Putin.

Erdogan has dominated Turkish politics for over a decade. When he was barred from running for a fourth term as prime minister, he successfully ran for president. (Video via Presidency of the Republic of Turkey)

A position that's supposed to be mostly ceremonial, though his interpretation of ceremonial has been pretty broad.

Erdogan chairs the occasional cabinet meeting, and even though Turkish law mandates the president be nonpartisan, that hasn't stopped him from campaigning for his neo-Islamist political party. (Video via Presidency of the Republic of Turkey)

And now, he's calling for a rewrite of the constitution that would change Turkey’s government from a parliamentary system to a presidential one. (Video via Presidency of the Republic of Turkey)

Efficient, probably, because his vision of a presidential system wouldn't involve the types of checks and balances we're used to in the U.S. (Video via Presidency of the Republic of Turkey)

Which is a bit concerning because like his Russian counterpart, Erdogan has a penchant for jailing journalists, using force to silence his opponents — oh, and who could forget the time he cut off the country's access to Twitter. (Video via The Kremlin)

Erdogan routinely points out that he was elected by the people, and as such, he has a mandate "to govern, but also to make a new constitution." (Video via Presidency of the Republic of Turkey)

To do so, his party would need to win a two-thirds majority in parliament when Turkey holds elections June 7. Polls predict they'll come in just short of that.

Meaning, his dream of a super-presidency might not become a reality anytime soon. His dream of building a $615 million megamansion with silk wallpaper? That, he can check off his to-do list. (Video via Euronews)